Jamie Vardy, Wes Morgan and David Nugent scored for the Foxes, who remain in the Premier League basement despite a battling and thrilling effort.

Spurs remain tied for sixth with victorious Southampton, a point back of fifth-place Liverpool, while Leicester sits in 20th with 19 points, seven back of safety.

Kane now has 19 goals, tops in the Premier League.

Spurs captain Hugo Lloris was stretchered off in the third minute after a collision inside his own box. Jamie Vardy dribbled in on goal but Kyle Walker caught

Kane then netted a pair of goals in quick succession, first getting on the end of an Eric Dier flick to put Tottenham on the board.

The second found Kane’s hot form providing a bit of luck, as he mishit a shot that deflected off Robert Huth and into the Foxes’ goal.

Nacer Chadli was shown yellow for a greedy and needless dive in the 33rd minute, as Spurs looked ready to make it 3-0 at any moment. 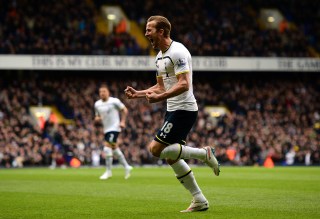 Leicester made it 2-1 before  halftime when David Nugent’s pretty pass was left-footed home by a streaking Vardy.

Nugent and the Foxes could’ve twice equalized in the first three minutes of the second half before finding the tying goal in the 50th minute. Wes Morgan powered a header home off a corner kick.

Spurs picked up a controversial PK attempt in the 64th minute after Danny Rose and David Nugent collided inside the Foxes’ box, and Kane converted it to complete the hat trick.

Eriksen’s late shot went off Jeffrey Schlupp and into the Leicester goal for an insurance tally via own goal before Nugent hit a ball on the break that beat Vorm to finalize the scoring.