A testy El Clasico went in favor of the hosts, as Barcelona increased its La Liga lead to four points with a 2-1 win over Real Madrid on Sunday at the Camp Nou.

The match was even after 45 minutes. Mathieu redirected a Lionel Messi free kick past Iker Casillas in the 19th minute, but Madrid equalized 12 minutes later. Neymar missed a golden chance in the Real end and the visitors countered hard, with Karim Benzema back-heeling the ball for Ronaldo to finish near the penalty spot.

Madrid also had a Gareth Bale goal disallowed due to an offside– by a sliver — flick from Ronaldo. 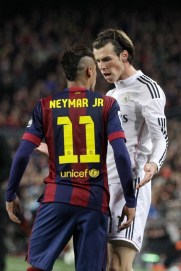 Eight different players had yellow cards within the first hour of play, with five going to Real and three to Barca.

Casillas didn’t do himself a favor on the match winner, as the Real keeper was outfoxed by Suarez on a 56th minute goal. The former Liverpool player made a borderline onside run past Pepe before hitting a hard low ball across the box and past the out-of-position Casillas.

Barcelona had the better of play as the game entered its final 20 minutes, and Neymar missed another chance in the 74th minute after being slipped through by a Messi dribble.

Claudio Bravo dove to make a stop on Benzema’s 20-yard strike in the 78th minute, pushing it wide of the goal.

Casillas made a great save after Messi sprung Jordi Alba with five minutes to play, and then watched as the goal post stopped Messi moments later. Real earned a corner in the 88th minute, and subbed off Modric for Lucas Silva.