One game in 119 words: With a riled-up home crowd still angry about the firing of Mike Petke, NYRB head coach Jesse Marsch’s home debut as Red Bulls’ boss could’ve easily gone much, much worse than a two-goal Atlantic Cup win. DC United rarely threatened and Luis Robles made a pair of fantastic saves on the rare occasion the Black-and-Red found a shot. Dax McCarty was strong in the midfield for New York, and Bradley Wright-Phillips and Lloyd Sam both brought their British best to the Red Bulls’ attack. Davy Arnaud won a late penalty, and Chris Pontius sent it into outer space to keep DC off the board. It’s stupid early to say this, but New York now currently has the best points-per-game in the East. 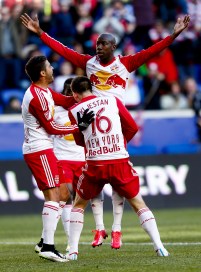 25’ — BWP toasts Birnbaum — Major League Soccer’s reigning goal king collected a long pass from Dax McCarty, then crossed up USMNT defender Steven Birnbaum before tearing into a shot for his first goal of this young campaign.

33′ — Robles denies Rolfe — Arnaud sent a terrific cross to the left of the box, and Chris Rolfe looked to have an equalizer off his left peg, but Luis Robles got his fingertips on the ball with a low dive to keep it 1-0 for NYRB.

71′ — Turnover crushes DCU — Arnaud had the ball stripped away in his own end, and Wright-Phillips slipped the ball to a right-running Lloyd Sam. The former Leeds United midfielder smashed the ball near-post and past Bill Hamid for his second goal in as many matches.