Juventus may’ve pretty much sewn up yet another scudetto, but the race for European places remain as strong as ever.

Derby mates Roma and Lazio are the front-runners for runner-up status, with Roma holding a one-point edge in the race for second, but Sampdoria, Napoli and Fiorentina are all within shouting distance.

Will tbe continued European presence of Fiorentina and Napoli cost them in the fight for next season’s UEFA Champions League?

Cesena 0-1 Roma
It was harder that the visitors would’ve liked given the hosts’ status in the Serie A drop zone, but Daniele De Rossi came to the rescue for the umpteenth time. It was the hard-nosed midfielder’s second goal of the season, and kept Roma in second place. 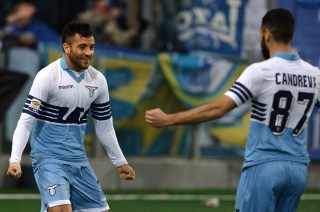 Lazio 2-0 Verona
He may be just 21 years old, but Brazilian midfielder Felipe Anderson is finding his form in a big, big way. The rumored Liverpool target scored for the ninth time since Dec. 7 and third time in two weeks to help Lazio keep pace with its Roman neighbors. The two sides meet in the second-last week of the Serie A season, and are separated by just a point.