A woeful United States defense gave away two leads to hat trick hero Nicklas Bendtner and Denmark in a 3-2 loss at cold, windy NRGi Stadium in Aarhus on Wednesday.

Jozy Altidore scored and assisted on an Aron Johannsson tally to lead the USMNT in a dicey road effort. The States were outplayed for large stretches by their hosts, and the Yanks’ defense was very shaky outside of John Anthony Brooks (who was far from perfect himself).

“We’ve gotta be able to finish the game,” said captain Michael Bradley on the ESPN broadcast. “Not good enough.”

Nicklas Bendtner scored his 27th, 28th and 29th international goals for Denmark inside of his 65th cap.

Altidore made it two goals in two USMNT matches this year, giving him 27 goals in 79 caps for the Yanks, while Johannsson netted his fourth U.S. goal. 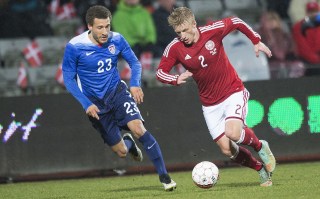 There were some early troubles on the left side of the defense, as Greg Garza and John Anthony Brooks struggled to contain a speedy Lasse Vibe.

Krohn-Dehli came close to finding Bendtner 15 minutes in with a cutting cross from the left of the 18, but it took a slight deflection and skipped on the wet, fast pitch.

Eriksen blasted a shot over the net from in tight as Denmark beat Timmy Chandler on the left side and Rimando pushed the ball out to the rushing Danes.

Chandler made up for it, though, spying Altidore with a mismatch and sending a diagonal ball  from 45 yards away. Altidore beat some terrible defense from Denmark and blasted a left-footed ball past Stephan Anderson, who started instead of Kasper Schmeichel.

Sunderland, it’s not him, it’s you.

Denmark capitalized on extremely suspect marking in the box, as Bendtner was left all alone by both Gyasi Zardes and Chandler, and the former Arsenal man easily passing home a cross-six pass from Daniel Wass, slightly-altered by Vibe.

The second half began with Alfredo Morales whiffing on a header that allowed Bendtner to race in on goal. His lofted shot missed wide.

Another gaffe came when Morales couldn’t handle a pass from Shea, and Rimando barely got a piece of Christian Eriksen’s shot before it was cleared off the line by Orozco.

Eriksen sent a gorgeous long ball over Garza that Vibe lashed wide of Rimando’s goal, as Denmark looked much more comfortable than the visitors.

The States did a bit of threatening in the 61st minute, including a terrific cross from Shea on the left that missed the heads of the Yanks’ far-post runners.

Then Bradley reversed the States’ post-World Cup second-half curse, with the captain picking out Altidore with a strong diagonal ball that Altidore laid off for Johannsson to finish. The U.S. had been outscored 9-0 in second halves since the tournament in Brazil (and entered the match with a 9-3 first half advantage). 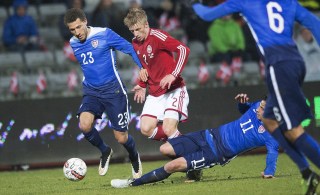 It didn’t last. The States’ defense was again out of place, as this time DeAndre Yedlin didn’t account for Bendtner, who smashed the ball past an out of sorts Rimando. It would’ve been a splendid save, and the match was level at 2.

And the States defense was victimized by another long ball into the box, as Bendtner darted ahead of Garza and Brooks to lash a gorgeous goal past Rimando.

Brooks nearly headed home a gorgeous free kick from Bradley in the final minute of stoppage time, but it was not to be in Aarhus.