There are plenty of worthy candidates for Week 4’s MLS Player of the Week honors, presented by the stunning and salient minds of Pro Soccer Talk.

From inspiring comeback stories like Jordan Allen’s match-winner for Real Salt Lake — that could’ve been part of a 2-2 match if MLS refs weren’t being MLS refs — to some good-looking clean sheets, there were standout performances all over the pitch.

And we won’t be giving out the honors to Robert Earnshaw despite his late game-winner for Vancouver because, well, did you see the Portland defense on the play?

A miserable weather day in New England saw Kelyn Rowe score a pair of goals and, while they all count the same and Rowe is a beaut, both took turns off San Jose players en route to the scoreboard.

Darlington Nagbe had himself a ballgame for Portland, but the Timbers’ losing effort makes it hard to call him the most dominant player of the week. Sporting KC’s Ike Opara scored a goal and had a strong defensive game in the tight confines of Yankee Stadium, but won’t claim the award. 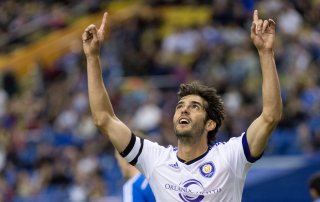 And while Chris Pontius and Jack McInerney each scored gorgeous goals, it was a former AC Milan man who earns our top honors.

Kaka could take home an award for industry over the first four weeks, as there’s no way the 2007 Ballon d’Or winner is just here for a paycheck. In Orlando City’s 2-2 draw with Montreal, Kaka worked to set-up Pedro Ribeiro’s goal before side-footing home the equalizer.

Throw in the fact that Orlando was down to just four available substitutes due to international duty and injury, and Kaka is the MVP of the week. Well done, sir. We know you’ll find the room on your mantle.

MLS Players of the Week