Michael Bradley is one of the most complete players in the history of the United States men’s national team, an industrious midfielder with tremendous vision who scores a lot more for his country than he has for his clubs.

Jurgen Klinsmann is a free-talking European hero with a personality much different like his captain for this week’s friendlies. His experimentation is much different than his predecessor, Bob Bradley, who is admired in American soccer circles and has gone on to relative success as a manager at both the country (Egypt) and club (Stabaek).

So it feels fitting, at least to me, that the majority of American soccer fans would rebel against Klinsmann and not Michael Bradley as the player struggles in the United States set-up. Perhaps already ensured the future label of USMNT legend — Top 20 in caps, Top 15 in goals, Top 10 in assists as a midfielder at age 27 — to say Bradley is struggling is a bit of an arbitrary term here, as Michael Bradley’s man-marking and tackling remains strong.

It’s his work with the ball that has cost him. In fact, isn’t it funny that we’re pointing to Bradley missing a sitter and blowing another scoring chance as an indictment against Klinsmann for playing him in an advanced role? As if a very good player’s missed chances are because his coach put him in a different spot? Brek Shea banged home a free kick despite playing back. How come that didn’t mess with his mojo when an opportunity presented itself?

Klinsmann has clearly decided that Bradley is his best option as a playmaker, and it’s a choice he made long before the troubles of this week (or even this year). Choice is a key word here. I have little doubt that, given a legitimate No. 10, Klinsmann would slide Michael Bradley back into the formation. He simply has a glut of decent choice to sit on top of defenders, as Danny Williams proved today in joining Geoff Cameron, Jermaine Jones and Kyle Beckerman as adequate if not strong in a set back role. 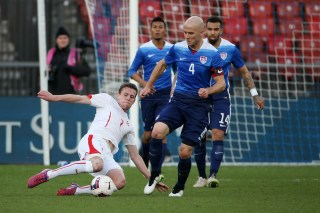 In fact, giving Jones more freedom at the World Cup was another nod to Klinsmann’s lack of faith in his attacking midfielders (though this will certainly rile up those still stung by Landon Donovan’s omission from the Brazil roster). Unfortunately, we can’t know Klinsmann’s plan had Clint Dempsey not been injured. Perhaps Michal Bradley would’ve been set back a bit more, a different link in the chain.

Mix Diskerud is the States’ best hope, though Klinsmann has also looked at Alfredo Morales in his engine room, although Alejandro Bedoya was at his best during the Switzerland match. But look at the mix of players who weren’t called and ask yourself who’s going to be a better fit as a playmaker. Is it Lee Nguyen? That’s the only name I see that begs further investigation.

Ironically, it seems Michael Bradley’s drop-off in offensive production has come since Klinsmann arrived. I’ll even subtract his prolific 2007-08 season in the Eredivisie, where he netted 18 times.

Additionally, and perhaps this has a lot to do with his maturation as a player versus positioning, but follow me here as we walk down a path accompanied by the troublesome but somewhat useful “assist” statistic. As bizarre as this is to read, Michael Bradley didn’t register a single helper for the States until 2011. In the Klinsmann era, he has 12.

Remember how he had covered more ground than any player at the World Cup by the time the States had been eliminated? How many coaches are lauded for making a player 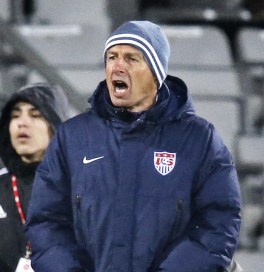 uncomfortable in prodding them forward? And it might be worth noting that the United States has been shut out exactly twice since the start of 2014 (Ukraine and Germany).

Look, I’d swear by Michael Bradley as a player and leader a lot more than I’d vouch for Klinsmann as a coach (Heck, look at the names above who weren’t called in for this window: Cameron, Diskerud, Beckerman). I was jazzed when my young son asked for Bradley jersey instead of those “sexy” goal scoring choices (“Yes, son… be the destroyer!”).

I’m certainly not 100 percent sold on the German legend as American leader, but I also think there’s a measure of “He’s not American” in many of anti-Klinsmann sentiments, and that if Ben Olsen led the States to the same finish at the World Cup he’d get a lot more high-fives. But it’s worth discussing whether Michael Bradley’s use as a more advanced attacker is more of an indictment on possible U.S. players in that role rather than this wacky coach forcing a square peg into a round hole.

And, by the way, if this experiment does bear fruit by the time of the Gold Cup, the Copa America Centenario and/or the Confederations Cup, it will certainly have been worth the pain of this Fall and Winter.

Bradley is the Yanks’ best; If learning whether he can adapt higher up the pitch in meaningless matches is wrong, I don’t want to be right.