On the other hand, if the photo at right, which can be found for sale on this website, is indeed the USMNT’s home jersey for the 2015 calendar year, at least you’ll be able to save yourself between $100-150 by not buying either abomination of a jersey produced by U.S. Soccer and Nike.

As a number of jokesters on Twitter have already pointed out, the above shirt looks like a piece of paper fresh out of the printer after the ink cartridge ran out halfway through the job.

2015 is a really big year for the USMNT — 2015 Gold Cup and the start of 2018 World Cup qualifiers — and the — 2015 World Cup — so it’s pretty awesome that they’ll have not one, but two atrocious kits from which to choose with so much of the world focused on the continent of North America this summer.

Let’s pump the brakes just a second, though. Have a look at the below photo. The website currently selling this shirt lists the U.S. shirt under the category “Copa America 2015,” while the men’s team won’t compete in the Copa America until the summer of 2016. Also, it currently costs $16.88? Pre-emptive clearance pricing because sales are expected to be low? How shrewd of you, U.S. Soccer and Nike.

That said, everyone — U.S. Soccer and Nike included — know people are still going to buy this jersey anyway, because that’s what fans do. If only we could stop fans from being fans, they might be forced to make a real effort to design a halfway decent kit again. 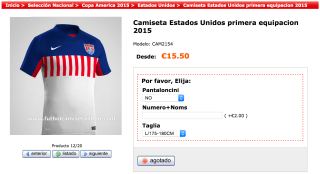