It’ll be a busy, busy several days for this season’s promotion push and relegation struggle in the second tier of English football, as both Friday and Monday are saturated with matches, with a Saturday and Tuesday sprinkling as well.

All of Friday’s matches are in the books, and there were some entertaining matches to be sure.

There are arguably eight contenders still harboring realistic dreams of the Premier League, and the automatic slots are far from done and dusted. In years past, there’s almost always been a cut-and-dried, “Well they’ll make it for sure” club, but this season sees a jumble.

Friday’s results did little to change that, as Bournemouth’s draw at Ipswich allowed Middlesbrough to leap atop the fray with a win against Wigan, while Norwich jumped to third with a win at Brighton. Watford’s draw at Derby County was gutsy and dramatic, but did not allow the club to join Middlesbrough atop the table. 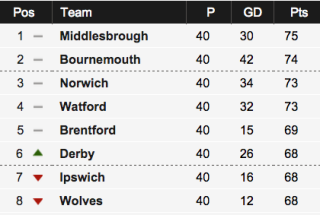 And Watford will have to turn around and host Middlesbrough in a massive Monday match which could see upheaval at the apex or a maximum 4-point lead for the Boro. That’s the only matchup of teams in the top 8 for the rest of these busy five days.

Meanwhile, the bottom of the table has been fairly set for a while, but Millwall refuses to give up easy. The Lions beat Charlton 2-1 to keep hope alive, moving ahead of Malky Mackay’s Wigan side and within four points of losing Rotherham. As you can see, it’s a three-horse race for one spot, barring calamity from the 20th or better-placed sides (though keep an eye on Wigan and Fulham next week). 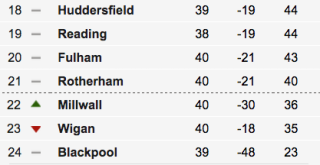