If not for those Messi and Ronaldo fellows, Atletico Madrid’s Antoine Griezmann could lay serious claim to being the La Liga player having the best 2014-15 season. The 24-year-old attacker, in his first season for Atletico, has racked up his 15th goal of the season as Los Rojiblancos (62 points) rolled past Cordoba, 2-0, to reclaim third place in the league on Saturday.

Griezmann’s latest strike was a clinical, low finish to the far post from just outside the penalty area. After turning the Cordoba defender closest to him, Griezmann unleashed the powerful, left-footed shot from 20 yards out and goalkeeper Juan Carlos had no chance of getting a hand to it, even at full stretch. 20-year-old Saul Niguez provided the insurance goal, his fourth league goal of the season, for Atletico six minutes before halftime. 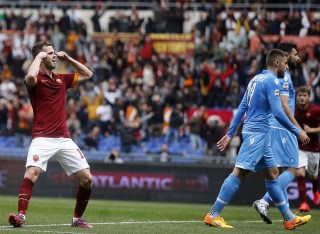 While Roma (56 points) find themselves 14 points behind leaders Juventus, they’ve got a real fight for second — and the final automatic UEFA Champions League qualification place — on their hands, as Lazio, their not-so-friendly Rome neighbors, are just a point behind in third with nine games to be played.

On Saturday, Rudi Garcia’s side knocked off sixth-placed Napoli and picked up a much-needed three points, thanks to Miralem Pjanic’s 25th-minute strike.

Mohamed Salah simply hasn’t been able to stop scoring goals since he joined Fiorentina at the end of January. On Saturday, the Egyptian attacker netter his fifth goal in seven starts in all competitions, a 64th-minute mazy run through the Sampdoria defense and powerful shot past the ‘keeper. Alessandro Diamanti struck for Fiorentina three minutes earlier, giving the Viola a comfortable home victory.

The three-time defending champions and current champions-elect picked up another easy-peasy victory on Saturday, 2-0 over 14th-placed Empoli, thanks is large part to Carlos Tevez’s stunning placement of an indirect free kick from six yards out. That link is worth a click and a watch — or six. Roberto Pereyra scored the other for Juve, four minutes into second-half stoppage time.