Another match day, another day of tumult at the top of the English Championship division, as the race for Premier League places is as tight as ever.

If the regular season ended today, it’d be the rhyming pairing of Cherries and Canaries gaining automatic promotion to the Premier League thanks to Monday wins, while Ipswich Town and Wolverhampton would miss out on the promotion playoff.

Wolves, however, still have a match-in-hand on the group.

Norwich continued its run for a quick return to the top flight by knocking off Sheffield Wednesday 2-0 on Monday. Bradley Johnson scored both goals for the Canaries, and has 10 this year after scoring three during their relegation campaign last season.

Bournemouth had a tougher route to hit the division’s apex, going down 2-0 to Birmingham in 21 minutes of play before scoring four-straight to win 4-2. The Cherries had four different goal scorers and finished the match up a man.

Watford was temporarily atop the table after beating Middlesbrough in the day’s early match. Troy Deeney scored, as is often the case, for Elton John’s favored club.

Blackpool was relegated after Rotherham United’s 1-0 win over Reading. 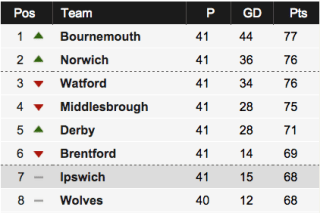