Along with American tours and transfer rumors, April brings a slew of “leaked” Premier League kits for next season.

How Manchester United will look back in Adidas has been of much interest to many uniform buffs, and perhaps we have our first glimpse of that with the above and below images.

Sharp and simple, the away and third shirts are theoretically here for your perusal (we haven’t seen a red yet, but if it’s the inverse of the white it should be a solid design).

PICTURE: The rumoured Manchester United away and third kit designs for the 2015/16 season. #MUFC pic.twitter.com/wm3WVgWLVa

Footyheadlines.com also has a leak of potential Chelsea shirts for next season, with some sharp red trip moving in on both home and road shirts. The white and blue will be welcome by those with disdain for the alternate color kits that’ve been a recent Chelsea staple (There’s, of course, a black option as well). Here’s the white with new sponsor Yokohama: 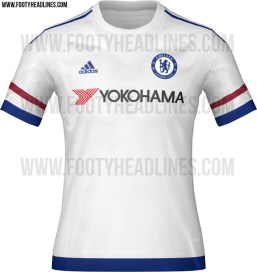