Deford’s take is that American soccer, meaning MLS, hasn’t yet caught the imaginations of sports fans here, and that it isn’t likely to as long as Major League Soccer isn’t among the top leagues in the world.

Of course, that’s chapped several undersides in our “quick to react” soccer culture, and many are just calling Deford an over the hill, ancient-thinking click-baiting troll.

But that’s neglecting a couple of things:

1) Frank Deford is, on the whole, quite far from a troll, and one of the most respected writers of sports journalism’s modern era. Sure he has his salacious headlines, but on the whole his treatment of topics like this is far from patronization.

2) Doesn’t he have a point? I’m not talking about the fans in MLS, NASL and USL markets pumped about their local teams. That culture is brilliant, growing and going to keep moving up in interest. And soccer itself will continue to grow here, eventually reaching the heights Deford projects.

Soccer in America has a curious impediment to its popularity, and the problem is soccer — that is, everybody else’s soccer.

After all, Americans not only believe that we are the blessed exceptional, but that we have the divine right to always have the most exceptional entertainment right at our fingertips. The British Empire, theatrical division, seems to have taken up residence here. And hey, nobody has any problem with immigration if you’re a baseball, basketball or hockey player.

Yes, the World Cup attracted terrific interest, but then, so does Kate, the Duchess of Cambridge, every time she has a baby. Then it’s back to all the first-rate exceptional diversions that we have right here.

Sure, Deford drops the inevitable “soccer moms” and diving/theater blasts, but in terms of MLS making the major leap most of us desire, no one is claiming the league is there, so why be upset when someone tells you the same? Plus, considering the long head start the States gave Europe, catching up in world-renown is almost impossible to do in 20 years. In this piece, Deford says that Beckham didn’t get the sport moving here — debatable — but he’s lavished praise on Becks/MLS in the past.

Deford, it should be noted, is not a soccer fan and many may be reacting to their distaste for his distaste as opposed to his point.

Via /r/MLS, Frank Deford was hating on soccer in America in NINETEEN NINETY TWO. http://t.co/ifi7lLvm0p pic.twitter.com/0ojCuNkFbH

Put it this way: India and China are huge nations that are sure to be forces in soccer by the time most of us leave this Earth, but short of the Indian Super League and Chinese Super League signing the world’s best players and sponsors in the primes of their careers, it’s going to be a slow build.

Neutral American viewers, largely, are drawn in by the best of the best, and they tend to like it better when those “best” are playing at home. See NASCAR defeating open wheel racing as a prime example. In fact, one of the biggest sports in Europe that is also saluted by the U.S. is basketball, and the NBA is the biggest league in the world right now. Cricket and rugby, not so much. 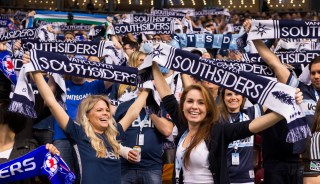 So here’s my point to Deford’s post: It really doesn’t matter. The opinion he presents is one that is going to be trumped in time, guaranteed, unless MLS vomits all over itself. United States businessmen have either bought or are consistently linked with big clubs in England. Ownership is a status symbol, and when it’s more important to have that be Stateside, those folks will vie with bigger businessmen for American club ownership.

MLS has some things to sort out, as do NASL and USL and any other interested ruling party in U.S. soccer. For one, this country is huge which makes minor and major league play quite a costly endeavor. And courting the European team fan to watch a currently inferior product is a challenge that demands a great stadium atmosphere. Some have it, some don’t… and it shouldn’t be ignored that the brightest ones hail from longtime soccer markets like Portland and Vancouver.

If you’re asking me, there’s no question that U.S.-based club soccer is going to arrive at its destination of being a major competitor on the club scene. It’s 100 percent unreasonable to expect it to be there now, or in five years. Being upset with Deford for stating the absolute obvious — to me — is like being mad at someone for observing that some butterflies are in cocoons while others are already soaring through the sky.

But hey, NPR got your attention. And Alexi Lalas underlined your hopes in a very real and salient way:

But turning “fantasy” into reality is what American exceptionalism does. http://t.co/xSk4Ay9OzA