Have a look at the above video produced by the Montreal Impact’s amazing video production team which takes us all behind the scenes of the Canadian club’s historic CONCACAF Champions League semifinal victory Tuesday night, and you’ll begin to understand why. Other than the fact the video couldn’t possibly be anymore well done, it provides a brilliant peek inside the crazy, beautiful, complicated world of CONCACAF and illustrates why so many teams that went before them failed.

Before the team even arrives to the stadium

“Don’t put your heads near the windows. When we get there, you close your windows shut. Don’t make eye contact, point your fingers at something or do anything stupid, please. We don’t need that.”

Those are the final instructions given to the team before they departed from their hotel Tuesday evening. Reminder: They were headed to a stadium to play a soccer game, not to the front line to fight a war. 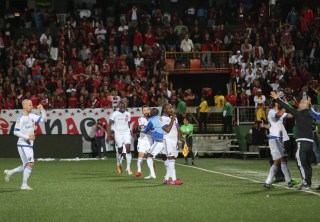 The unbridled passion of COCNACAF nations

Is the game, as it is played in CONCACAF, as popular throughout the rest of the world as, say, what we see on our televisions every week from Europe? Of course not, but take that roar of the Alajuelense crowd with every goal, and I guarantee it stacks up against anything you’ll find in the commercialized, mainstream world of elite European soccer.

The unbridled hostility of CONCACAF nations

The above video — amazing as it is — doesn’t even show the numerous objects thrown by fans at the Impact players, a list which included all the traditional projectiles, like the coin that hit goalkeeper Evan Bush in the back of the head, and a slightly more sophisticated, costly approach, like the shoes — yes, shoes — thrown at an injured Dominic Oduro.

There’s also the effect that hostility has on referees. Do you want to try to tell me that the Alajuelense player who took three stabs at stomping on Ignacio Piatti’s leg, then put two hands around his neck, wouldn’t have been sent off — let alone a yellow card, which he didn’t even receive — had Tuesday’s game been played in Montreal? 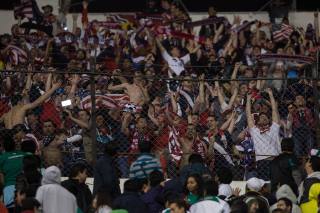 Don’t forget, it’s the same for national teams, too

While the U.S. national team qualifying for the World Cup might seem like a given from afar, it’s anything but the eight times every World Cup cycle the USMNT travels south for qualifiers in North and Central American and Caribbean countries. You can see from the above video that these aren’t just games for the fans in attendance, but rather an event, a life event, that means so much more to the locals than winning or losing.

What you see in the above video is exactly what every visiting team faces every time they visit the likes of Costa Rica, Mexico, Honduars and Panama in the Hexagonal round of qualifying. We’ve come a long, long way, but it still doesn’t look or feel quite like that here in the U.S., does it?