Last week we linked out to a leaked shirt which many were saying was the new USMNT jersey, and many were not happy about the potential for that to be the case.

Well, it seems like that was a hoax after a new jersey was leaked out by FootyHeadlines.com on Friday.

[ PHOTOS: Is the the new USMNT jersey? ]

They claim that they have the new jerseys for both the USMNT and USWNT (and they have been correct on many occasions in the past) as the women’s national team will wear it this summer at the World Cup in Canada and the men’s national team could unveil their new home jersey against Mexico later this month or in Holland this June.

See the images below for the latest leaked jersey. Do you think the white and black look is the way to go for a home jersey for the USA? Let us know what you think about the new design in the comments section below.

Call me old fashioned but I love this simplistic approach compared to the stripes and various bright colors depicted on the other leaked jersey from last week. The decision to have not red or white on a home jersey may upset some folks as the shorts and socks are said to be plain white too. 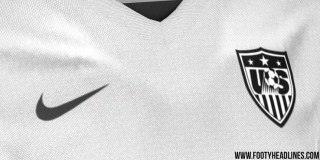 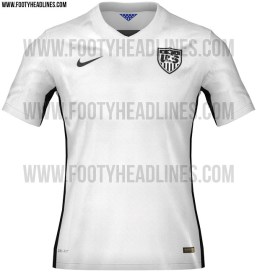