Barcelona jumped out to an early lead on the back of goals scored by Lionel Messi (14th minute) and Neymar (31st), but failed to secure all three points and blew the La Liga title race wide open, as Ever Banega (38th) and Kevin Gameiro (84th) hit the current league leaders back for a 2-2 draw. Messi’s goal was the 399th of his Barcelona career.

With two points dropped in Seville, Barca’s lead was cut in half on Saturday, from four points to two, thanks to results elsewhere in the league.

Do you remember the scene in The Dark Knight where the Joker says the Batman, “I don’t want to kill you. What would I do without you?” That’s Barca and Madrid. Real’s real struggles left the door wide open for Barca to take total control of the league title with barely two months of the regular season remaining. Barca slip up on Saturday, and Real rediscover their form to make the race close again.

Cristiano Ronaldo (21st minute), Javier Hernandez (31st) and Jese Rodriguez (83rd) were the goalscorers as Los Blancos won their third-straight league game, by a combined score of 14-1, since they tasted El Clasico defeat on March 22.

Antoine Griezmann bagged his 17th and 18th league goals of the season to cancel out goals scored by Fernando Torres (own goal) and Samuel. After rescuing a point, Diego Simeone’s side currently sits in third, four points clear of Valencia and Sevilla, the final automatic UEFA Champions League qualification place in Spain. 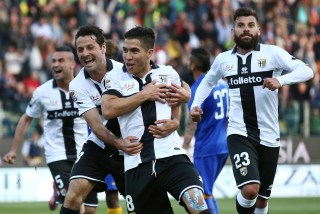 If the current league leaders lose the very bottom team in the league and there’s no other team within 14 miles (points) to see it, did it really happen? Based on video evidence, it did indeed happen on Saturday, as Serie A champions-to-be Juventus fell to relegation-certain Parma, 1-0.

Massimiliano Allegri elected to rest a number of key starters with his side facing Monaco in the Champions League quarterfinals on Tuesday. 18-year-old Jose Mauri scored the only goal of the game, a placed finish from the top of the penalty area, giving Parma just their 16th point of the season (minus-three points deduction for failing to pay players’ wages). Roma (56 points) and Lazio (55) now hold a game in hand over Juventus (70) in the not-so-hot title race.

It’s time to break up Inter Milan. Roberto Mancini’s side got their first win in eight tries (all competitions) on Saturday when they beat up on 15th-placed Verona.

Mauro Icardi (11th minute) and Rodrigo Palacio (48th) scored for the visitors before Luca Toni missed a penalty for Verona and defender Vangelis Moras put the ball into his own net (92nd) to complete the humiliation of losing to one of Serie A’s middling Milan sides. Inter move up to 8th with the victory, ahead of AC Milan on goal differential.