Saturday was a fitting appetizer for Sunday’s duo of derby games, as teams at the top, middle and bottom of the table tried to create room for themselves to advance upward.

Aston Villa may’ve pulled clear to safety and Leicester City sent a message not to count them out as a Premier League club for 2015/16, while West Bromwich Albion, Sunderland, Hull City and Burnley are left to lick their wounds and hope their points come on another day before the season lets out.

Oh, and a certain USMNT defender from the University of Akron made his Premier League debut.

Don’t count out Nigel Pearson and the Foxes. For one thing, the Leicester City boss might hold you down by the throat for it. For another, David Nugent and his teammates are proving to be resilient, and could be out of the drop zone if they use their match-in-hand for all three points. The Foxes trailed 1-0 and 2-1 but scored twice in the final dozen minutes to pick up three huge points, and leave Baggies boss Tony Pulis mentioning relegation as an option (despite a seven-point lead on the drop zone).

Alan Pardew is feeling his oats after doing something Newcastle fans wish he could’ve in his last four tries as Magpies’ boss: beat Sunderland. Pardew’s Eagles, led by a Yannick Bolasie hat trick and yet another goal from resurgent Glenn Murray, tore up the Black Cats. The only goal Sunderland scored came in the 90th minute, and Dick Advocaat’s crew is just three points ahead of the drop despite its 1-0 win over Newcastle last week. 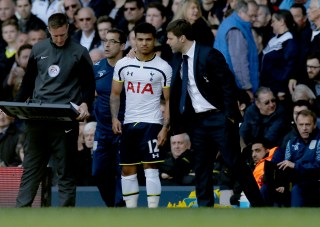 Christian Benteke is on fire! Five goals in three matches and eight in the past month and a half don’t begin to tell the tale of the big Belgian, who looks like he’s finally found his form post-knee surgery. Benteke is not only scoring powerful goals, but he’s also slipping his teammates on for prime chances. Of course, Tim Sherwood’s taking credit for that, as well as a win against the club that sacked him last May.

Of note to United States fans, DeAndre Yedlin made his Premier League debut. The right back played a dozen minutes or so in relief of Vlad Chiriches, and may’ve shown enough battle to win some more time over the sometimes-shaky Romanian.

The Clarets had their chances, but Arsenal got its goal early and didn’t need much more to beat Sean Dyche’s charges. The Gunners remain in second place, hoping for a Chelsea stumble, while Burnley remains two points shy of safety.

It took a while, but Saints broke through against a plucky, gritty Hull City side. Alex Bruce gave up a penalty that James Ward-Prowse converted, and Graziano Pelle netted in the 81st minute to salt away the win and leave the Tigers barely hanging on to a safe place in the standings.

Never rule out Mark Hughes’ Stoke, and never consider a lead safe for Sam Allardyce’s Hammers. At the death, Marko Arnautovic canceled out Aaron Cresswell’s wonderful free kick to keep the sides level on points (but West Ham in ninth on goal differential).

There weren’t a lot of exciting moments in this one, as Seamus Coleman handled a ball late to give Jonjo Shelvey the penalty kick that equalized Aaorn Lennon’s 41st minute goal. Garry Monk’s Swans probably deserved better than a point, but hard work and good soccer doesn’t always put the ball across the line.