Tim Sherwood walked into his former employer’s home and snatched three big points for Aston Villa while also taking European momentum from Tottenham in a 1-0 win on Saturday.

Villa’s win puts its six points clear of the drop zone, and gives Sherwood his third win in 8 matches in charge of the Midlands club. For Spurs, its another missed chance at moving up the table. The London club is in 7th place with 54 points.

Benteke put Villa up 1-0 when he leapt to power a Leandro Bacuna cross past deputizing Michel Vorm.

The first half could’ve finished 3-1 instead of 1-0. For Spurs, Christian Eriksen made a great run before hitting a bouncing ball wide of the frame, while Villa saw Bacuna sky a good chance yards over the goal and Gabriel Agbonlahor cranked a good strike off the post. 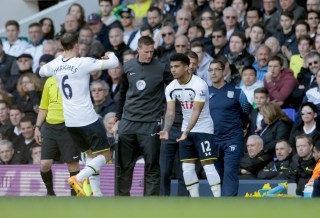 But the next chance came for Villa, as Benteke passed Fabian Delph in on goal. Delph lost a slipping Yedlin but was denied by Vorm to keep it 1-0.

Overall, Yedlin was not timid upon debut, handling right-sided throw-ins and matching up with big Benteke on the end line during a late tussle for possession.

Carlos Sanchez picked up a red card in stoppage time, as the match