The U.S. national team notched another “Dos A Cero” victory against their bitter North American rivals, Mexico, on Wednesday night. While Wednesday’s game was only a friendly, it was also the USMNT’s final game to be played before a series pre-2015 Gold Cup friendlies in June.

With this summer’s CONCACAF tournament less than three months away and head coach Jurgen Klinsmann now faced with more than a handful of questions and roster decisions before July arrives, here’s three things we learned from “Dos A Cero,” Part 7.

1. THE USMNT MIDFIELD IS JUST BETTER WHEN KYLE BECKERMAN IS IN IT

It doesn’t matter what facet of midfield play that you’re talking about — ball retention, ball-winning, shielding the back four, etc. — the USMNT midfield does it better when Beckerman is on the field.

Beckerman played just 63 minutes against Mexico, but he won the ball back 15 times (interceptions, recoveries and tackles won combined — just look at that impenetrable shield in front of the backline down below) and misplaced just nine passes. Not only does he win the ball back at a ridiculous rate (highest number of ball-wins against Switzerland and Denmark were 8 and 8, respectively), but he gets rid of it and to the feet of Michael Bradley and Mix Diskerud in a timely fashion.

The quicker Beckerman advances the ball to the midfield’s playmakers, the less time opposing midfields and defenses have to recover and fall back into shape. Hopefully his injury is nothing serious for his club’s sake and for the USMNT, because he should be on the Gold Cup squad this summer. 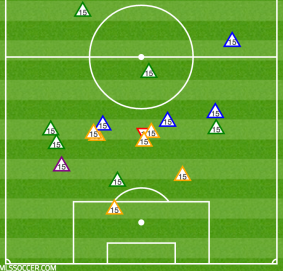 [ MORE: Looking back at the best moments in the USA-Mexico rivalry ]

2. JUAN “SWAGUDELO” IS A GAME-CHANGER FOR THE USMNT

Look, I still have huge questions about whether or not Juan Agudelo can lead the line or contribute at a high level for 90 minutes, but as a 20- or 30-minute sub late in games, no matter the scoreline, there’s no one else in the USMNT’s player pool that can change the game and pull off the spectacular and fashion a chance out of nothing quite like Swagudelo.

The way he plucked Bradley’s long ball out of the air in the build-up to his goal was practically identical to the goal he scored against the Colorado Rapids two weeks ago. That’s the kind of unpredictability and flair the USMNT has lacked for so, so long. In the World Cup round of 16, Belgium turned to Romelu Lukaku, while Klinsmann called upon Chris Wondolowski — you see what I’m getting at here?

And he’s not just an out-and-out forward who adds very little to the build-up. He’s actually really good at linking up with the center forward and making dangerous inside runs from the left wing. He certainly brings more to the table right now than Wondolowski, Aron Johannsson Bobby Wood, or Rubio Rubin, all of whom continue to receive regular call-ups.

3. U.S. SOCCER CARES MORE ABOUT $$$ THAN THE SAFETY OF THEIR PLAYERS

The temporary grass surface at the Alamodome for Wednesday night’s game was absolutely atrocious. Large patches of dirt and shifting seams were visible through the television broadcast, and the two teams were extremely lucky that only one player (Beckerman, in a non-contact situation) was injured on that shoddy field.

We know that these high-profile friendlies are about nothing more than making money, and that’s fine. It really is. The U.S. Soccer Federation needs these games to pay for things like team travel and youth development, which are both very important. But please — please, please, please — don’t do it with complete disregard for the safety of your players.

The Premier League Fan Fest is heading to Philadelphia in 2022, as the entire Premier League Mornings Live team will be in Philly for what promises to be an incredible weekend.

Our latest Fan Fest will take place on October 15-16 in Dilworth Park and we can’t wait to be in the City of Brotherly Love.

That weekend the huge Liverpool vs Manchester City clash takes stage (Sunday, Oct. 16 at 11:30am ET), while on the same day in the other type of football the Philadelphia Eagles host the Dallas Cowboys on NBC’s Sunday Night Football.

It will be one heck of a party in Philly.

Below are more details on the event, while all you have to do is click on the link above to sign up so you can be there.

Premier League Fan Fest is coming to Philadelphia in October

This marks the first Fan Fest in the state of Pennsylvania and continues a period of huge celebration for soccer in Philly.

With the Philadelphia Union flying high atop the Major League Soccer standings, plus Philadelphia recently announced as one of the host cities for games at the men’s 2026 FIFA World Cup, the beauty of the beautiful game is spreading to every corner of Philly’s famous streets.

Premier League Mornings Live is BACK and we're heading to the City of Brotherly Love!

Join us at Dilworth Park in Philadelphia October 15-16.

Philadelphia was supposed to be the site of our Fan Fest in March 2020 but was postponed due to COVID-19.

“Philly’s been waiting, and we wanted to use the best opportunities at the right moment to come back,” NBC Sports’ senior vice president of consumer engagement Lyndsay Signor told The Philadelphia Inquirer. “For all of the reasons that we landed on Philly for 2020 — the fandom the city, as the heart of so many professional sports — there was never a question.

“But I think when it started to get closer to Philadelphia hosting the World Cup, and looking at some opportunities to collaborate around Sunday Night Football … it felt like a really awesome time to fire up the Philly fan base again, and bring Fan Fest back and actually be able to execute it without COVID parameters in the way.”

Before you watch the Premier League this weekend, make sure to know who’s expected to win.

And, if you’re into it, be sure to check out who our ProSoccerTalk crew of Joe Prince-Wright, Andy Edwards, and Nick Mendola think who’ll deliver the goods.

Considering that winning requires getting the correct result (win, loss, or draw), getting a ‘W’ in picks isn’t all that easy.

The originator of PST’s picks, Joe Prince-Wright, is now in second place after a rough week for Andy Edwards, but Nick Mendola’s re-established his first-place status with the most wins by a single writer in a single week this early season.

Full odds provided by our partner, PointsBet – PointsBet is our Official Sports Betting Partner and we may receive compensation if you place a bet on PointsBet for the first time after clicking our links.

You can download the NBC Sports Predictor app (below) and play the Premier League Pick ‘Em game yourself to predict the scores and win the prizes.

Injury-hit Fulham visits West Ham United on Sunday, hoping to catch weary hosts just back from a midweek trip to Belgium when the sides tangle at London’s Olympic Stadium (watch live, 9am ET Sunday on CNBC and online via NBCSports.com).

The Irons are looking to build on their Premier League form after beating Wolves on Saturday and rolling it into Europa Conference League play at midweek. West Ham beat Anderlecht 1-0 on Thursday as Gianluca Scamacca stayed hot to keep the Irons perfect in group play.

Fulham has been a handful this season but won’t have Nathaniel Chalobah, who was suspended in last weekend’s loss to Newcastle, in addition to possible absences for playmakers Kenny Tete, Aleksandar Mitrovic, Antonee Robinson, and Willian.

Here’s everything you need to know ahead of Fulham vs West Ham.

How to watch West Ham vs Fulham live, stream link and start time

Fulham may be without Robinson and Tete in addition to definitely missing Layvin Kurzawa, leaving Kevin Mbabu as the lone regular fullback certain to be available. Attacking injuries could shift focus to ex-Tottenham loanee Carlos Vinicius and wingers Neeskens Kebano and Daniel James.

West Ham started the Anderlecht win with Declan Rice, Lucas Paqueta, Gianluca Scamacca, and Pablo Fornals on the bench, with the quartet entering over the final 21 minutes to deliver the W. Aaron Cresswell, Kurt Zouma, Thilo Kehrer, and Tomas Soucek were completely rested, so there won’t be too much worry about the weariness angle mentioned above.

Brighton vs Tottenham is an early-season test of credentials as the host Seagulls look to show their top-four quality is on the level of their third-place visitors at the Amex Stadium (watch live, 12:30pm ET Saturday on NBC and online via NBCSports.com).

The Seagulls have given new manager Roberto De Zerbi a solid start in taking over for Graham Potter, who left for Chelsea.

Now they’ll look to show that the team has plenty in the tank for a long run in the European places, currently three points behind Spurs with a match-in-hand on the North Londoners.

Tottenham has looked solid but also knows it has to show the 10-man North London derby loss was a fluke.

Here’s everything you need to know ahead of Brighton vs Tottenham.

How to watch Brighton vs Tottenham live, stream link and start time

Brighton’s been getting so much of its offense from Pascal Gross and Leandro Trossard, the latter coming off a hat trick and in the upper end of the Premier League leaders in both goals and assists. Alexis Mac Allister has been solid in the midfield and at the penalty spot.

Spurs continue to use Harry Kane in the Starting XI time and time again, and the English center forward hasn’t worn down yet. A midweek scoreless draw in Germany against Eintracht Frankfurt will see Spurs show up to the party with more miles on their legs than the home team.