If we’re all just being honest with ourselves, we’ll reluctantly — or, readily — admit that the world is kind of a messed up place. Besides the fact there’s plenty of legitimately bad people out there, there’s even more not-good people among our more than 7 billion co-inhabitants here on planet Earth.

One perfect illustration of not-good people showing their not-goodness the most just so happens to occur during one of the world’s simultaneously best and worst creations: sports. Yes, soccer is the world’s game, the “beautiful game,” but no, it is not immune to this not-goodness. Not by a long shot.

The rise of social media has done lots of good for mankind, but the worst it’s done is to provide a public platform to every person in the world, when so many of our fellow Earthlings are so obviously not properly equipped to handle such a heavy burden.

Throw those two things — sports and social media — together, and you’ve got a powder keg just waiting to explode with not-goodness all over everything and everyone that could/should be good.

Anti-discrimination group Kick It Out recently did a study of social media activity and sports, the abuse which it subsequently generates from soccer fans — Premier League fans, in particular — and the results are, while not surprising in the least, still just as staggering.

According to Kick It Out’s study, this season alone there have been 134,400 discriminatory posts involving a Premier League player or club. This season. Not since the invention of Twitter (88 percent of posts) or Facebook. Since August. Eight months ago. Quick math says that’s roughly 17,000 discriminatory posts per month. Or, as the BBC points out, one every 2.6 minutes since Aug. 16.

Who do these keyboard warriors target, you ask? And what kinds of abuse incessant vile — which they would never say to their face, mind you — are they hurling these professional athletes who are the very best of the best? Not shockingly, racial and homophobic abuse ranks very near the top of the list. 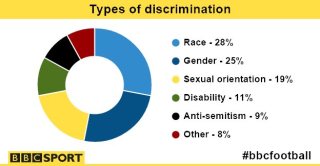 The above numbers are the types of abuse that individual players — you know, actual humans — receive. What’s perhaps more mind-blowing — and ridiculous — is the amount of abuse that fans hurl at the social media accounts of individual clubs. You know, not actually a real, living being, but an idea, an organization, a company. At that point, you might as well spend your Saturday afternoons yelling obscenities at your refrigerator because you dislike the color of its doors, or handles.

Unsurprisingly, the Premier League’s top five clubs were the most abused of the league’s 20 teams. 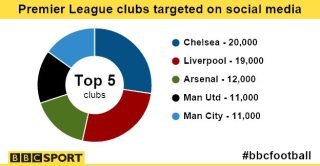 And the most abused individual in the Premier League, you ask? That would be, again, unsurprisingly, Mario Balotelli, who has been hit with more than 8,000 abusive posts this season, 52 percent of which were racist in nature.

For a full rundown of what games incited the most abuse and what Kick It Out plan to do about this disgusting epidemic, head on over to the BBC’s fantastic write-up of the data and see for yourself.