Perhaps you’ve heard of two guys named Luis Suarez and Lionel Messi, the scorers of Barcelona’s two goals on Saturday, as Luis Enrique’s men maintained their two-point lead over Real Madrid (78-76) in the race for the La Liga title.

Suarez and Messi bookended a somewhat blah performance from Barca with 1st- and 94th-minute goals, respectively. Messi’s through ball played Suarez in on goal and the Uruguayan put the hosts ahead with just 55 seconds on the clock. Messi’s late exclamation point, which was also the 400th goal of his Barca career (below video), was initially saved by Diego Alves, but the rebound fell to the feet of Messi and the Argentine slotted the ball into an empty net.

Real Madrid were not made to pay for Cristiano Ronaldo’s missed penalty in the 67 minute with the game still hanging in the balance at 1-0. Instead, Los Blancos rode Sergio Ramos’s 24th-minute goal and James Rodriguez’s 69th-minute blast from the edge of the penalty area to a 3-1 victory, keeping Barca within reach with six league game still to play for both sides.

Ronaldo found a way onto the scoresheet, adding a late insurance goal from close range in the 92nd minute.

Remember the name Antoine Griezmann. He’ll be the next Rojiblanco to follow in the footsteps of Sergio Aguero, Radamel Falcao and Diego Costa to tear it up at Atletico Madrid and garner a big-money move to one of Europe’s top 10 teams.

Griezmann, who only joined Atleti last summer, bagged his 19th and 20th league goals of the season (six in his last four league games; 23 in all competitions), including a stunning overhead (below video) kick for his first, in helping Diego Simeone’s side reaffirm their hold on third place in the league. With six games to play, last year’s league winners hold a four-point lead over Valencia (69-65) for the third and final automatic UEFA Champions League qualification place. 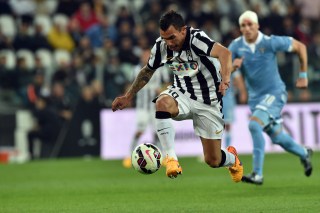 Carlos Tevez (18th league goal, 26 in all competitions) and Leonardo Bonucci tallied first-half goals (17th and 28 minutes, respectively) as the soon-to-be four-time Serie A champions rebounded from last week’s reserve-side defeat to Parma and extended their league lead, for a day at least, to 15 points by beating the current second-placed side in the league.

Having suffered their first defeat in eight league games (all victories), Lazio’s quest to best their Roman rivals takes a big hit, as Roma host 17th-placed Atalanta on Sunday, needing just a point to pull level on points and three to go two points clear.