Cuauhtémoc Blanco is retiring a champion after helping Puebla to a 4-2 win over Chivas Guadalajara in the Copa MX Clausura final at Olimpico Universitario BUAP Stadium on Tuesday.

The 42-year-old forward may be best known for his exploits with Club America and the Mexican national team, and here for his time with the Chicago Fire, but played for many teams over the course of a 23-year career.

He’s retiring after playing the final 20 minutes of the title match, lifting a trophy and… going off to run for Mayor of Cuernavaca, according to MLSSoccer.com.

As a side note, check out unused sub and USMNT veteran Herculez Gomez in the above photo. Michael Orozco is a regular starter for Puebla. 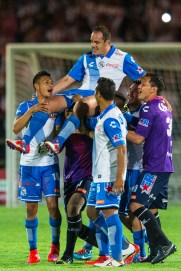 Blanco netted 39 times in 120 caps for Mexico, and took a ceremonial turn for El Tri this year.

He was part of two Gold Cup winners and has the 1999 Confederations Cup title to his credit, too.

On the club side, Blanco was an MLS Best XI member for Chicago, and scored 18 goals in parts of three seasons. His most prolific days came with Club America, where he scored 125 goals in 333 appearances.

It’s impossible not to respect the achievements of Blanco, even as begrudging admirers from the U.S. side. Godspeed, Cuauhtémoc, and… enjoy politics?