Like it or not, this is what happens when you allow a brand to help dictate your look.

Nike has had hits and misses with its United States uniforms over the years, for men and women. And we’re not quite sure where to come out on their latest look, unveiled Wednesday on Twitter for this summer’s Women’s World Cup (except to say it’s definitely better than the gradient blue kit currently being sported by both teams).

The white kits with black striping, numbers and logo, meet a burst of color at the bottom of the uniform. It’s either quite dramatic, or slightly less. We can’t tell from these two Tweets.

Teams that never let up once, never have to think twice. #NoMaybes pic.twitter.com/dHSQnv5oZJ

Built for brilliance. Get the 2015 #uswnt Home Kit first in the App: http://t.co/XCKXoQfSvd pic.twitter.com/hKNKNP2yyH 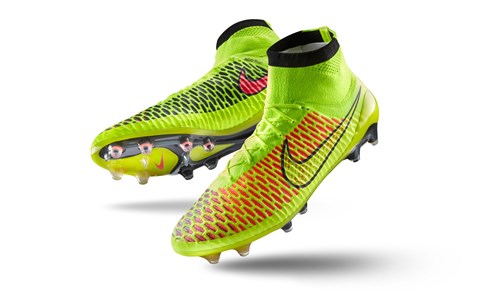 Honestly, I kinda like the look of the uniforms (not the boots, no experience there). The jury’s out — many personalities up here — on whether I like the unis as a World Cup look for my national team, but the green on the bottom will have a neat look coming across the grass. Theoretically, it’s like black stick tape combined with a hockey puck. Maybe there will be some illusions (not magic tricks, Michael) at play?

The slogan, however, we could do without. “No Maybes” is the best you have?