Barcelona look dead set on reclaiming the La Liga title, as their latest victory, 2-0 over their Catalan neighbors Espanyol, keeps the pressure on Real Madrid, who now trail Barca by five points with a game in hand.

Neymar opened the scoring, putting Barca ahead in the 17th minute, and was quickly upstaged by this beauty from — who else? — Lionel Messi, in the 25th minute. Jordi Alba did manage to get himself sent off 10 minutes into the second half, meaning heal miss Tuesday’s clash with Getafe.

Antoine Griezmann’s 21st and 22nd league goals of the season (25 in all competitions) helped Atletico Madrid bounce back from this week’s Champions League disappointment, as the reigning La Liga champions beat 14th-placed Elche, 3-0. Raul Garcia provided the other goal for Atleti, who now sit seven points clear of Valencia, who have a game in hand, in the race for third. 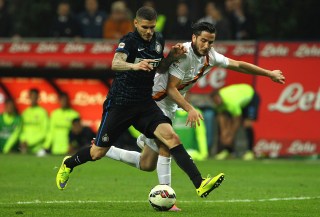 Good news — and goals — have been hard to come by for clubs residing in the city of Milan, but the blue half of Milan got a bit of both on Saturday, as Inter knocked off Roma and moved into 7th place in Serie A, their highest standing for quite some time.

Hernanes gave the hosts an early lead (15th minute) before Radja Nainggolan equalized in the 63rd minute. 22-year-old Mauro Icardi broke the 1-1 deadlock with a quick turn and finish past Morgan De Sanctis in the 88th minute, leaving Roma stuck in third place, behind their Rome rivals Lazio on goal differential.

Saturday also brought some not-so-good news for the red half of Milan, as AC Milan fell to 12th-placed Udinese and find themselves mired in 10th place, mid-table mediocrity for one of the world’s most powerful and successful clubs just a few years ago.