Siem de Jong scored in his return from a collapsed lung, but that’s about the only good Newcastle can take away from a 3-2 loss to Swansea City at St James Park on Saturday, the Northeast side’s seventh-straight loss.

After the Magpies got a goal from Ayoze Perez early, Swans found goals from Nelson Olivera, Gylfi Sigurdsson and Jack Cork to build a 3-1 lead before de Jong netted late. Swansea’s 50 points are good for 8th place, seven back of Southampton.

Newcastle United has been on 35 points since February, and that once mid-table total now sits just five points ahead of the drop zone. The proud club now has seen second-half meltdowns in consecutive seasons.

Perez’s reflexes provided for the hosts’ 20th minute goal, but the Magpies sunk into a poor state as mid-table Swansea found its form before and after halftime.

First, Nelson Olivera potted a wide open header — he didn’t even need to leap — in the 45th minute to tie the score for Garry Monk’s side. 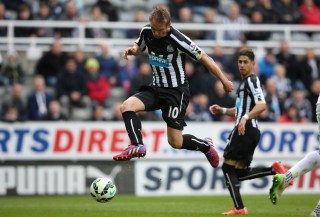 Then Gylfi Sigurdsson got in tight to give Swans their first lead just after halftime before Jack Cork netted his first Swansea goal to make it three-straight goals for the guests by the 71st minute.

De Jong got on the end of a great Jack Colback cross, and the goal looked like NUFC management dreamt it back in the summer transfer window. Newcastle’s oft-injured No. 10 scored his first goal for the club since coming over from Ajax.