Graziano Pelle scored a pair of goals for Southampton, but Spurs answered twice in a 2-2 draw at St. Mary’s on Saturday morning.

Erik Lamela and Nacer Chadli scored for Tottenham, which maintains its one-point lead over Southampton in the Premier League table, and pulls ahead of Liverpool for at least a few hours

Ryan Mason’s slip-up just outside the 18 allowed Pelle to pounce for a 30th minute goal, an easy finish past Kellen Davis. 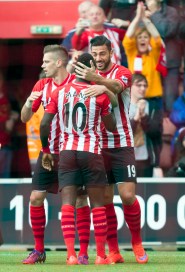 Shane Long subbed in to pay immediate dividends, crossing for Pelle to head home just three minutes into his shift.

But Chadli answered within five minutes, taking Eric Dier’s pass and scoring from an improbable angle to restore the deadlock.

Davis wasn’t poor, but Saints are clearly missing the steady play of Fraser Forster between the sticks.