Mauricio Pochettino returned to St. Mary’s on Saturday, to the stadium where he became a managerial star by shepherding Southampton’s meteoric rise from the lower levels of the Football League. 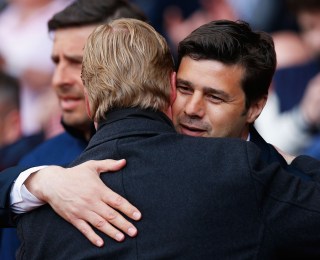 And the Spurs boss was jeered at times during the match, but also backed up by traveling Londoners who saw their side twice rally back from Graziano Pelle goals to draw 2-2.

Pochettino didn’t brush off the experience, either, as he was clearly affected by his return to Southampton.

“I want to thank the Spurs fans because they were fantastic and I felt their support on the pitch. They touched me because they backed me a lot. When they sang my name it was the first time I had heard that from them and I appreciated that so much.

“I was focused on my job but was a very tough and emotional game for me. It was difficult because I still love Southampton and I have very good memories here.”

No surprises there, but good on Spurs fans. Some may be struggling with their new boss, but they picked the right time to have his back.