It took Steve Bruce five years to bring Dame N’Doye to the Premier League, and his wait is paying off for Hull City.

N’Doye, 30, scored twice to lift Hull City out of the drop zone in a 2-0 defeat of Crystal Palace on Saturday, giving the Senegalese striker five goals in 10 PL appearances since arriving from Lokomotiv Moscow on the final day of the January transfer window.

The Tigers’ striker broke Palace’s defense, as well as their two-week reign atop the POTW awards list.

And he took a pay cut to come to the KC Stadium:

‘”I’ve never seen anybody take as big a pay cut as what Dame did,’ said Bruce, ‘He wanted to play in England.

“We’ll get the money back to him because if he keeps producing like he did today, he will earn a new contract, either with us or somewhere else. I saw him five years ago for Copenhagen and tried to buy him then, I couldn’t because of a work permit. He was in Paris for a week in January and I flew over on deadline day, met him in a hotel and thankfully got there in the end. It was worth the hard work.”

Premier League Player of the Week 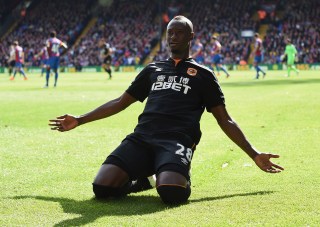