A roundup of Wednesday’s action in Spain and Italy’s top flights:

Following Barcelona’s 6-0 victory on Tuesday, Real Madrid had to win to keep pace in the La Liga title race, and did just that to remain just two points behind the Catalan giants (84 to 82).

James Rodriguez opened the scoring just before halftime with a stunning full volley from more than 20 yards out that no ‘keeper in the world could have saved. Mauro Dos Santos put the ball into his own goal to make it 2-0 and Alvaro Arbeloa add that late insurance goal (84th minute) to complete Real’s sleepwalk-over of Almeria.

One place below Real and Barca, down on 75 points, are Atletico Madrid, who used a 1-0 victory to maintain their six-point lead on Sevilla for the third and final automatic UEFA Champions League qualification place in La Liga.

Fernando Torres scored the only goal of the game after rounding the ‘keeper and sending a couple of onrushing defenders to ground and cutting back inside to slot the ball into an open net with just over 15 minutes left to play. It was just Torres’s second league goal since rejoining Atleti in January. 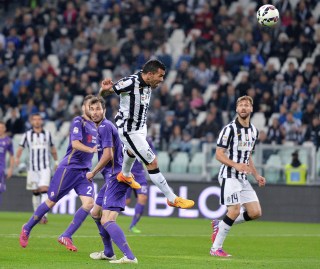 Thanks to a thrilling 3-2 victory over Fiorentina on Wednesday, Juventus now need just two points from their final five league games to be crowned 2014-15 Serie A champions.

Gonzalo Rodriguez gave Fiorentina the lead from the penalty spot in the 33rd minute, but the advantage was short-lived, as Fernando Llorente equalized three minutes later. Carlos Tevez headed home during the first minute of first-half stoppage time and scored again in the 70th minute, shortly after Rodriguez’s unsuccessful second penalty attempt. Josip Illicic pulled one back for Fiorentina in the 90th minute, but Juve held on for their 23rd league victory of the season.

The race for second and Roman superiority is on, as Lazio and Roma remain just a point apart in the standings, on 62 and 61 points, respectively.

Marco Parolo, Miroslav Klose and Antonio Candreva all scored for Lazio inside the first 16 minutes of their 4-0 thrashing of Parma. Balde Keita added the fourth, as Lazio hold onto third place. Meanwhile, Roma were busy putting together their own flurry of goals, scored by Seydou Doumbia, Alessandro Florenzi and Miralem Pjanic, en route to a 3-0 victory over Sassuolo.