The beginning of the season seems ages ago, when newly-promoted Paderborn made it to the top of the Bundesliga off some surprising results.

That was before a long decline sent the club into the bottom of the table, from where it has just emerged after a big road win.

All that and more inside the Bundesliga wrap.

Rupp’s goals in 70th and 80th minutes helped Paderborn shock Freiburg and send the visitors into safety for the first time in weeks.

The hosts went ahead on Nils Petersen’s 40th minute tally, but lost the chance to put some distance between themselves and the relegation zone. Freiburg is now just goal differential above the promotion playoff spot.


There were still some big names in the mix for Bayern, as Manuel Neuer, Bastian Schweinsteiger, Philipp Lahm and Mario Gotze hit the pitch for the league champions, who out-possessed Bayer but were out shot, our cornered  and out crossed. 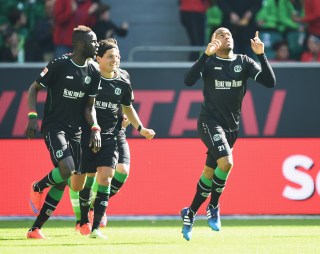 Perisic scored in the first half, and the hosts looked ready to coast to a win and cement themselves in second place.

Something happened at halftime, though, and the relegation-battling visitors found a point through a pair of French-born players. First Jimmy Briand netted just after halftime before big defender Salif Sane provided an equalizer 11 minutes later.

Hannover falls into the relegation playoff spot, though, after Paderborn’s win, and Wolfsburg’s second-place lead of Bayer is down to four points.