Barcelona scored a combined 14 goals in their two La Liga game this week — six vs. Getafe on Tuesday, and eight vs. Cordoba on Saturday. All in all, a pretty typical week for Luis Enrique’s side, which is really cruising along at the moment, as the Blaugrana maintain their two-point lead in the league and prepare for Wednesday’s UEFA Champions League semifinal clash with Pep Guardiola’s Bayern Munich.

Luis Suarez (three goals) and Lionel Messi (two) led the way on Saturday, adding to the pair of goals scored by each during the week. | FULL RECAP WITH HIGHLIGHTS

Real Madrid are the side most closely chasing Barca for the La Liga title, though despite enjoying a strong run of form themselves (seven-straight victories by a combined score of 27-6), can’t get any closer than the two points by which they currently (still) trail.

Carlo Ancelotti’s side held on desperately to a 3-2 victory away to Sevilla on Saturday after a Cristiano Ronaldo hat trick (36th, 37th and 68th minutes) put Real up 3-1 with 22 minutes to play. In the 79th minute, Vicente Iborra pulled one back for Sevilla, and Iker Casillas made a number of saves and clearances inside the final five minutes to preserve the one-goal lead and title challenge. 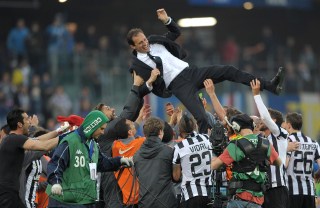 Juventus are officially 2014-15 Serie A Champions, thanks to their 1-0 away victory over Sampdoria, though we all knew sometime around December that only a miracle of historic proportions could spur any other side to league title glory. That miracle did not occur, and Juve have won their fourth-straight Serie A title.

Arturo Vidal scored the league-clinching goal, a header to the far post from a tight angle no more than three years off the endline, in the 32nd minute. With the league title now officially obtained, Massimiliano Allegri’s side turns its attention to their Champions League semifinal date with Real Madrid (Wednesday), in hopes of reaching their first European final since 2003.