The UEFA Champions League has just five more matches in store this season, each one a pairing of European giants.

The first legs of the semifinals begin Tuesday, when Juventus and Real Madrid tangle ahead of Bayern Munich and Barcelona squaring off on Wednesday. The pairs swap days of the week for the second legs, and the winners will emerge for a big showdown in Berlin on June 6.

[ MORE: In defense of Chelsea ]

What should you be monitoring for this week’s first legs? Here’s a quick five pack for you:

Several regulars were rested by Pep Guardiola in Bayern Munich’s 2-0 loss at Bayer Leverkusen over the weekend in the hopes that freshness can overcome injury moving forward. Robert Lewandowski (broken nose, jaw, concussion) has been practicing in a mask, while Arjen Robben and David Alaba are out. Franck Ribery is considered day-to-day. Bayern has the depth to deal, but Barca is relatively healthy.

2) How will Pep attack his old team?

Much has changed since Pep Guardiola left Barcelona for Bayern Munich, but the boss will still have plenty of familiarity when it comes to game plan for Lionel Messi, Andres Iniesta and others. Still, Bayern will have to worry about the three-pronged killer unit comprised of Messi, Neymar and Luis Suarez, while also testing Gerard Pique and company? Wednesday’s going to be a beaut.

3) Status of Serie A

Juventus is by far the class of Italy, and those penciling in Real Madrid for a trip to the Olympiastadion may not have been watching a lot of UCL and Serie A lately. Carlos Tevez has been a ruthless finisher in Europe, and Paul Pogba is playing at an incredibly high level for a 22-year-old. With stingy defending and Gigi Buffon between the sticks, an upset isn’t nearly as unlikely as you’d think. A big win for Real, however, would be a setback in the Italian revival through the UCL and Europa League.

4) Will Real Madrid somehow be caught looking ahead?

All the talk before the match has been about Real Madrid going after the Undecima, an unprecedented 11th European Cup. With a motivated Cristiano Ronaldo and Carlo Ancelotti, surely they won’t overlook Juventus too much. And Pepe is saying the right things .

“We don’t feel any pressure. We know it will be complicated and how hard it is to play here, but we’re very calm and we know that at this stage of the Champions League, there are no favourites.” 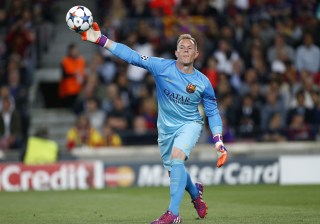 Marc-Andre ter Stegen has been Barcelona’s goalkeeper for the Copa del Rey and UEFA Champions League matches, but this is by far the biggest stage the 22-year-old has even trod. Now, will he be able to be the goalkeeper who emerges from a stare down with Manuel Neuer’s side to make it two straight youngsters as starters in the final (Thibaut Courtois backstopped Atletico Madrid to a second-place finish last season)?