CAN CHELSEA CREATE A DYNASTY?

You can bet your bottom dollar that no sooner than the blue and white confetti had finished falling onto the pitch at Stamford Bridge on Sunday that Jose Mourinho was already making plans to repeat this success next season.

Chelsea clinched the Premier League title by beating Crystal Palace and will be handed the trophy on May 24 following their final home game. It is their first PL title since 2010 and it was Mourinho’s third title in five seasons in charge of the English club. However his mind will now be focused on creating a club capable of replicating success year after year at home and abroad. A dynasty, if you will.

Since Manchester United won three-straight PL crowns in 2006-07, 2007-08 and 2008-09, no club has successfully defended its PL crown as Chelsea, Manchester City and United have all prospered but then failed to build on their single-season dominance. No dynasty has been created in the PL. Now, Chelsea and Mourinho has a chance to build one but unlike his first spell with the Blues when he delivered two back-to-back titles, the makeup and challenges the PL now possesses make it a vastly different landscape and Mourinho knows it. He has been lambasted by many this season for a cautious approach down the stretch and chants of “boring, boring Chelsea” from opposition fans are filled with both jealousy that their own team can’t grind out wins ruthlessly and a hint of truth about Chelsea’s cautiousness.

However, there’s no denying that the Blues were the best team in the league this season from start to finish. At the end of the season they will have lead the PL for a record number of days during the season, 274. Here’s a few factors which will determine if Mourinho can build on the domestic success of 2014-15:

So, we had the great Liverpool side of the 1980s, the superb Manchester United squad of the 1990s and then a lot of back and forth over the past 15 years as United threatened to create another dynasty but never quite sustained it as Chelsea and Man City muscled in. Now, can Chelsea finally deliver a dominant side which will be the champions of England for an elongated period?

It is a tough challenge but if anyone can deliver trophies, find a way to win that best suits the strength of the players at his disposal and deliver sustained success, it’s Mourinho.

Deary me. What is going on up at St James’ Park? Every season at least one club in the Premier League turns into a soap opera and the 2014-15 campaign has seen Newcastle United become the main attraction. In previous seasons the anger of locals towards owner Mike Ashley and former manager Alan Pardew made the headlines. Now it is caretaker boss John Carver who is the main protagonist.

Carver “lost the plot” following Newcastle’s 3-0 defeat at Leicester City on Saturday, as he insinuated that central defender Mike Williamson got himself sent off on purpose and questioned the commitment of the players at his disposal. That prompted a statement to be released by the club on Monday claiming that “frank dialogue” with Carver, the club and senior players has been had over the past few days.

The long-time assistant coach and local lad has been thrust into the spotlight as Newcastle’s season goes from bad to worse. Since Carver took charge in January the Magpies have picked up just nine points from a possible 48 and the players seemed to have downed tools as uncertainty around the direction the club is heading in goes on.

The buck stops at the owner and Ashley’s insistence to almost write this season off when Pardew walked out of the door to join Crystal Palace in January says it all. The players are coasting and they will probably just stay up despite a collapse unlike any seen in PL history. Empty seats and protests from fans are warning signs that this lack of investment in players from Ashley can’t go on but will he ever change? Unless he sells the club, Newcastle’s fans will be unhappy for a very long time.

In the video below our analysts break down Newcastle’s demise and wonder if they might be the club who slips into the bottom three after eight-straight defeats heading into the final match of the season. They also touch on the sticky situation Newcastle’s north east rivals, Sunderland, find themselves in.

Well, the top four race is back on. With Manchester United losing to West Bromwich Albion on Saturday, suffering three-straight defeats in the Premier League for the first time since 2001 in the process, Louis van Gaal’s men have reignited hopes of finishing in the top four for Liverpool.

Brendan Rodgers’ side are four points behind United with three games to go but seem to have a more favorable schedule than the Red Devils. Here are the remaining games for both sides:

If United lose to Arsenal on May 17 and succumb to the cauldron of Selhurst Park this weekend, this race for fourth place could go down to the final game of the season. Liverpool will likely need to pick something up at Stamford Bridge against the champions but if they can do that and United slip up then they could sneak into the the Champions League via the backdoor at the expense of their bitter rivals.

Below are the highlights from Week 35 in the PL, just in case you missed anything.

Mathematically, Burnley and Queens Park Rangers are both still Premier League clubs but in reality their days in the top-flight are over.

Burnley is eight points off safety with three games to go, QPR seven. There’s no saving themselves now. A miraculous escape would result in them winning all three of their final matches and the likes of Sunderland, Leicester City, Hull City, Newcastle and Aston Villa not picking up any more points. Stranger things have happened, but a quick return straight back to the Championship awaits. Burnley have been frugal and their downfall has been a lack of goals as Sean Dyche’s side have battled beyond their means and the PL is set to lose its smallest town. As for QPR, well, severe mismanagement from both former boss Harry Redknapp and at the director level has seen them spend extortionate amounts of money on players who have under performed. Interim boss Chris Ramsey is a good manager and has added belief in recent weeks that the R’s could get out of danger but they will come up short. The bigger issue is Financial Fair Play and whether or not they will be allowed to compete in the Football League next season due to the rash over-spending of owner and chairman Tony Fernandes. That story will rumble on this summer.

As for the rest, it seems like one from five will join QPR and Burnley in being relegated. Wins for Sunderland, Leicester City and Aston Villa at the weekend were much-needed, while West Brom’s shock victory away at Man United all but secured their survival. With Newcastle’s season spiraling out of control and Sunderland’s final two games of the season away at Arsenal and Chelsea, the two north east clubs look the most vulnerable to go down as Villa and Leicester has hit form at the perfect time of the season.

Here’s how things stand with three games to go as the race against relegation will take center stage in the final weeks of the PL season. 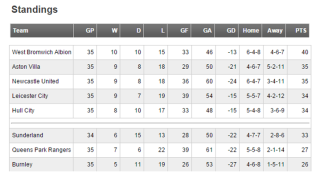