As many European leagues race to their finishes, several American players are going to feature in the stretch runs.

There’s speculation around White Hart Lane that USMNT back DeAndre Yedlin could earn his first Premier League start when Spurs head to the Britannia Stadium to face Stoke City on Saturday. He could see a familiar face on the other side of the pitch, as Geoff Cameron could return to the Starting XI for the Potters.

After years and years of knowing their guy was starting for Aston Villa each week, U.S. fans will have to wait to see whether Brad Guzan will get the nod over Shay Given against West Ham on Saturday.

Meanwhile, Tim Howard and Everton face a desperate Sunderland side to kick off Saturday’s slate of games.

Germany has a really nice trio of matches involving U.S. players. Fabian Johnson and Borussia Monchengladbach have a massive match-up with Bayer Leverkusen. Monchen is lookin 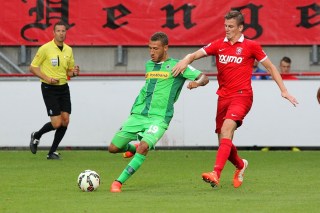 g to hold off Bayer for third-place in the Bundesliga — they have a two-point lead — and chase down Wolfsburg for second.

Then there’s John Anthony Brooks and Hertha Berlin, who have a shot to clinch top-flight safety with a win over visiting Borussia Dortmund. BVB, for its part, is looking to keep up its late charge for a European place. Timmy Chandler and Eintracht Frankfurt look to further their survival hopes with a Saturday win over visiting Hoffenheim.

Elsewhere, Ale Bedoya and Nantes will be visited by Bordeaux, among a number of other Americans Abroad playing in France, Germany, the Netherlands and Norway.