There’s a new second place club in the Bundesliga, at least for a day.

Borussia Monchengladbach continued its run up the table with a dominating performance against would-be contender Bayer Leverkusen, opening up a five-point gap on Saturday’s opponent.

But what about the bottom? There are now five teams within two points of the basement after No. 20 Stuttgart won. Hamburg has 32 points in 14th place.

It’s all a part of the Bundesliga wrap.

Johnson’s fellow USMNT vet, Timmy Chandler, picked up his first Eintracht goal in his 26th match since coming over from Nurnberg in the summer. His goal was the third of three first-half goals for the hosts, which lost its clean sheet to Kevin Volland shortly after halftime. The win boosts Eintracht eight points clear of the drop zone and relegation playoff spot, and to within two points of ninth-place Hoffenheim.

Could John Anthony Brooks and Hertha make it 3-for-3 when it comes to USMNT players in the Bundesliga? Nope, though one-time American prospect Neven Subotic netted for the hosts as Borussia Dortmund continued its charge toward the Europa League despite its horrible start to the season. 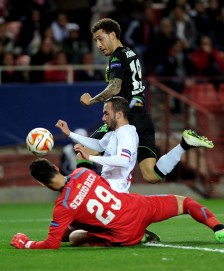 Fabian Johnson’s boys continue to produce fine displays, and the USMNT wide man again featured in a big Monchen win. Patrick Herrmann, Max Kruse and Ibrahima Traore all netted in the second half, and Johnson came off in the 89th. Now it’s up to Wolfsburg to take care of in-form Paderborn on Sunday, or else Gladbach stays second.