Ashley Young was largely responsible for both goals and David De Gea prevented several himself as Manchester United picked up all three points in a 2-1 win over Crystal Palace at Selhurst Park on NBCSN this Saturday.

Juan Mata scored a PK and Marouane Fellaini finished a header for United, which stays fourth with the win, two points back of Arsenal and Manchester City, and seven ahead of Liverpool.

Jason Puncheon scored for Palace, which remains 12th with 42 points.

United earned a PK when Scott Dann ducked his arm to block Ashley Young’s cross in the 18th minute. It was a no doubter, even though Dann claimed the ball struck his chest. Juan Mata, cool as ever, converted the chance past Julian Speroni.

Thre wasn’t much else to the first half until a scary incident with Luke Shaw. The young back took an elbow to the face and had trainers hold his head stable before being stretchered off the pitch.

Wayne Rooney subbed off at halftime after picking up a knock. Radamel Falcao replaced the English captain.

Mata struggled defensively. He had a bad early giveaway, and should’ve been called for a penalty after taking down Jason Puncheon in the box. The only thing that may’ve saved him is Puncheon unnecessarily throwing his hands in the air. 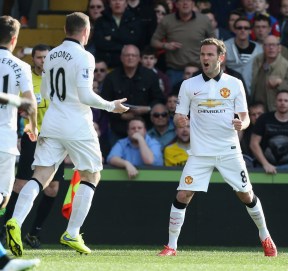 Puncheon got a little bit of good fortune moments later, when his free kick took a slight turn off the top of the Manchester United wall to soar past David De Gea. It was 1-1 in the 57th. Daley Blind was shielding his eyes from the sun and failed to duck away from the kick, which hit his head.

Murray should’ve made it 2-1 to the home side in the 71st minute, but there are a lot of “should’ves” to go around when De Gea is between the sticks. United’s keeper got his right paw on Murray’s attempt to keep it knotted at 1.

Young was quite lively for the Red Devils, and pulled off some scintillating 1v1 moves in addition to pushing some fine chances on goal.

Then Fellaini restored United’s lead when he rose to head home a brilliant Young cross in the 78th minute.