Thanks to a pair of second-half goals and another result elsewhere (we’ll get to that in a minute), Luis Enrique’s Barcelona side has one hand firmly planted on the La Liga title, with the domestic league, domestic cup and European cup treble looking more likely by the day.

Neymar put the Blaugrana ahead in the 51st minute, heading home from six yards out, and Pedro scored a stunning overhead kick (below video) with just five minutes of regular time still to play. David Moyes’ side did well to frustrate Barca for 45 minutes, but the quality of the soon-to-be champions shone through eventually.

With a four-point lead in the league — with just two games remaining — a place in the final of the UEFA Champions League all but booked, and a favorable matchup in the upcoming Copa del Rey final (Athletic Bilbao), Barca look good value to lift three trophies between now and June 6. The only thing that could make this year any sweeter would be if they pipped Real Madrid to the league title late in the season and beat Los Blancos in the Champions League final. Barca fans can dream, can’t they?

The title race is all but over after Real Madrid’s slip-up away to Valencia on Saturday. The fourth-placed side took an early 2-0 lead through Paco Alcacer (19th minute) and Javi Fuego (26th) before Diego Alves saved a Cristiano Ronaldo penalty kick on the stroke of halftime, preserving the two-goal lead heading into halftime.

Real pulled two goals back through Pepe (56th) and Isco (84th), but already trailing Barca by two points heading into the weekend, a Madrid draw is more than enough to hand the title to their bitter rivals, who can clinch next when they’re away to Atletico Madrid, who coincidentally won the league title on Barca’s home field just last year. | FULL RECAP WITH HIGHLIGHTS 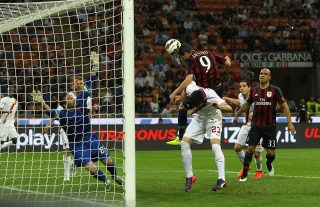 Saturday’s defeat came at the hands of 10th-placed AC Milan. Marco van Ginkel (40th minute) and Mattia Destro (59th, at right) provided the goals before Francesco Totti converted from the penalty spot to salvage a consolation goal for the visitors. With three games left to play, Roma hold just a one-point and four-point lead on Lazio and Napoli in third and fourth, respectively, each of whom now have a game in hand.

Juventus, who were crowned Serie A champions last week, opted to rest Carlos Tevez, Andrea Pirlo, Alvaro Morata, Gianluigi Buffon, Stephan Lichtsteiner and Giorgio Chiellini ahead of Wednesday’s Champions League semifinal showdown with Real Madrid. Massimiliano Allegri’s side did, however, welcome back Paul Pogba, who played 63 minutes and scored the Old Lady’s only goal of the game.