With just two more matchweek’s to go in the Premier League, the relegation race rumbles on as teams as the bottom continue to launch “great escapes” all over the place.

Sunderland, Aston Villa and Leicester City all won on Saturday, while Newcastle United drew and Hull City suffered a damaging defeat to Burnley.

That victory was too late for the Clarets, as they are the first team to officially be relegated this season. Here’s a look at how things stand and who is playing who in the final games of the season.

Man, it is tense out there…

Burnley – Bye, bye, Burnley. The Clarets went over 10 hours without scoring a goal before Danny Ings struck in the second half at Hull on Saturday to bag them a 1-0 win. It proved too little too late for Sean Dyche’s side as little Burnley haven’t spent big this season but have been well-organized and tough to beat. That extra touch of class in and around the box had just been missing as they’ve been relegated straight back down to the Championship after just six wins from 36 games.

QPR – The R’s will join Burnley in being relegated unless they beat Manchester City away from home on Sunday. So yeah, Chris Ramsey’s side seem doomed to go straight back down as their life a a yo-yo club continues. QPR’s Achilles heel has been shoddy defending all season and Harry Redknapp leaving in February did them no favors at all. 22 defeats from 35 games says it all. Big question marks regarding their status in the Football League next season as Financial Fair Play issues may hit them hard. Expect a clean out of an ageing squad.

Battling for their lives

Hull City – Dear, oh dear. Steve Bruce’s side slipped into the bottom three after losing at home to Burnley on Saturday and all of that momentum they earned from beating Crystal Palace and Liverpool in April has evaporated. Against Burnley they twice hit the crossbar via free kicks but at pivotal moments of the season they just haven’t had the goals to win games. The Tigers now face Tottenham and Manchester United in their final two games knowing they need at least a win, probably more, to survive.

Newcastle United – The Magpies snapped their horrendous eight-game losing streak on Saturday but only managed to grab a point at home to West Bromwich Albion. Hardly awe-inspiring but they have stopped the rot. John Carver’s men sit two points and one place above the bottom three but they have the easiest schedule remaining out of the five teams fighting for their lives: West Ham United away and QPR at home. Three points, or maybe even two, could be enough to keep them up.

Sunderland – Man, the Black Cats got lucky on Saturday. Their manager Dick Advocaat knew it too. Two deflected goals in the second half sealed a smash and grab win away at Everton but it doesn’t matter how you get the points. Sunderland has now won two on the spin and is unbeaten in three. Could it go down to the wire with their north east rivals Newcastle in the race against relegation? That would be incredible. As for their remaining games they host Leicester City in their next match (massive) and then finish the season with two away trips to Arsenal and Chelsea. The Mackems have a game in hand over their rivals but they have to beat Leicester next weekend ahead of two tough away games. 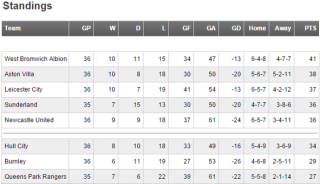 Leicester City – The Foxes have won six of their last seven and that run has been hailed as “phenomenal” by their manager Nigel Pearson. Leicester looked dead and buried on Dec. 26 as they were rooted to the bottom of the table and were six points from safety. After their incredible run they now sit in 15th place, three points above the bottom three with two games left. That game away at Sunderland next weekend will define their season. As for their final match they have QPR at home which is another winnable game. If Leicester can finish things off, Pearson has masterminded one of the greatest of “great escapes” the PL has ever seen.

Aston Villa – Tim Sherwood has revitalized Villa since replacing Paul Lambert. The Villans have won four of their last eight matches and look a completely different team as Christian Benteke and Tom Cleverley are banging in the goals. Villa is 14th on 38 points, four points clear of the drop, and has an away game at Southampton followed by a home match against Burnley to finish the season. If they can beat Saints next weekend and other results go their way then the Villans will be safe and Sherwood can kick-start his rebuild. Plus, they have the bonus of an FA Cup final to look forward to.