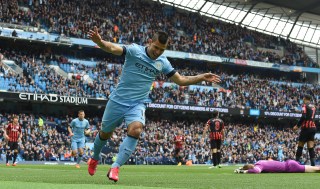 Sergio Aguero’s 23rd, 24th and 25th goals of the season clinched another UEFA Champions League berth for Manchester City, and doomed Queens Park Rangers to the Championship in a 6-0 win on Sunday at the Etihad Stadium.

Aleksandar Kolarov and James Milner also scored for City, which moves into second place. The Citizens have a three-point lead over Arsenal, which has played two less matches.

QPR is last in the Premier League, as manager Chris Ramsey was unable to undo the harm caused by Harry Redknapp’s poor start.

Aguero put City up when Steven Caulker allowed him to dribble toward the box, and Clint Hill darted in front of Caulker to tackle the Argentine. Aguero bodied the ball past both and then chipped a sliding Robert Green to make it 1-0 after four minutes.

Charlie Austin headed past Hart in the 20th minute off a great Joey Barton cross, but the striker was one of a trio of offside R’s and the goal wouldn’t go.

City, still, was firmly in control of the match and unfortunate not to have added a second and third goal. A terrific combination play with David Silva and James Milner failed to amount to a goal when Fernando failed to put home Milner’s cross. 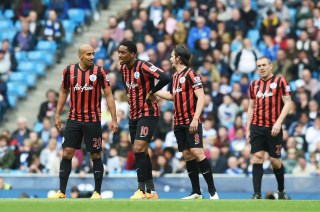 And Kolarov made it 2-0 when his free kick influenced Bobby Zamora to break from the wall, and the ball curled past a diving Green.

The former World Cup keeper then was called upon to make a sprawling stop on Aguero, who had turned the QPR back line into a speed bump.

Barton sent another free kick in that Leroy Fer tipped off the cross bar, and Joe Hart snared Zamora’s headed rebound to keep the score 2-0.

The second half provided no reprieve for the R’s, with Yun Suk-Young bungling the trapping of a David Silva clearance right into the path of Aguero. The Argentine raced onto a long breakaway run, and wasn’t about to let left-for-dead Green deprive him of a brace.

Green made a pair of saves on Silva and Kolarov midway through the second half to keep the deficit 3-0. 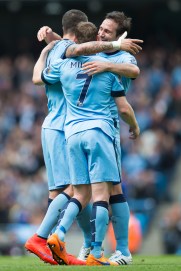 Moments later, Matt Phillips was whistled for taking down Silva in the penalty area, and Aguero completed his hat trick.

Then Wilfried Bony won a header down to Aguero, who passed across the six-yard box for Milner to tap home.

Yaya Toure subbed on late to a rousing chorus of “Happy Birthday” from the Etihad faithful. It was funny, all things considered.

Longtime City man Shaun Wright-Phillips entered late for QPR, and earned a nice round of applause from his former home fans.

Silva finished a slick combo play started by Aguero and aided by a Bony back heel pass to complete the scoring.