Xavi Hernandez will never play another competitive game on the immaculate Camp Nou field for as long as he lives.

OK, that was incredibly weird (and not fun at all) to write. It felt very, very wrong, but sometimes life just works like that.

Barca drew 2-2 with Deportivo La Coruna on Saturday, a result which saves Deportivo from relegation, and Xavi was given the kind of standing ovation that a legend of his stature so richly deserves.

Xavi in tears: “Many thanks for everything.” pic.twitter.com/sihhcRjDj8

Unsurprisingly, Xavi was moved to tears as he exited the Camp Nou field one last time in front of nearly 100,000 standing, applauding, singing, crying and reminiscing fans. Prior to kickoff, the fans paid homage to Xavi’s illustrious career with this massive tifo. 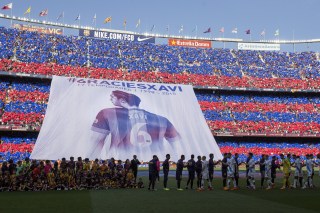