Under fire from the majority of Newcastle United supporters, owner Mike Ashley gave a rare interview ahead of Sunday’s finale against West Ham United.

Ashley took the blame for the club’s rancid finish, which nearly resulted in relegation before the 2-0 win over West Ham. That’s fine, but what will he do moving forward?

This is a man who’s sold a number of his best players without adequately replacing them — think Yohan Cabaye, Demba Ba, Andy Carroll — and nearly ruined his Premier League status by not solidifying his squad after clinching a Europa League season.

So has he learned? Maybe. From NUFC.co.uk:

“We have got the club on a very sound financial footing, so we are able to spend and punch above our weight thanks to the current financial situation the club finds itself in.

“We may have the cart, financially, but we now need to bolt the horse on, and we are going to.”

When quizzed about his intentions for the future, Ashley said: “To definitely win something and, by the way, I won’t be selling (the Club) until I do.

“(The club is not for sale) at any price. And when I say ‘win something’, if we ever get into a position of being in a Champions League place, that also counts as winning something.

“From this day forward we will be making our own luck.”

[ MORE: Carver pleads for a chance to run club full-time ]

Those are good words from a good business who rarely speaks up, but Ashley is also a salesman. There are some big questions to answer like: 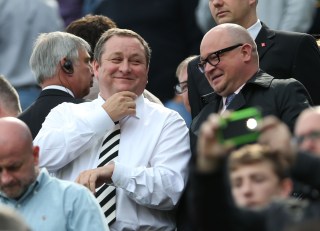 1) Can he build on chief scout Graham Carr’s acquisitions of Moussa Sissoko and Daryl Janmaat?

2) Can he resist making a profit on bargain buys like Ayoze Perez?

3) Will he appoint a manager who isn’t viewed simply a yes man?

4) Can he get out of his own way with the media?

The answer, of course, is yes he can. But will he? Remember that he said these things before Newcastle clinched safety. In the past, the club has spoken of always wanting to finish in the top half of the table. Will Ashley green light a manager to go for a Cup win if it’s at the expense of a table slot?

Rarely do we see a zebra change its stripes. In Newcastle’s case, given their uniform colors, maybe the club needs Ashley to change into one. This summer will be key, especially if Middlesbrough brings another set of Northeast Derbies to the Premier League.