“I want to thank all of you who were brave enough to support me, but all that said I will be withdrawing from the race.”

And with that, Prince Ali Bin Al-Hussein heard a round of applause, hugged US Soccer boss Sunil Gulati and UEFA president Michel Platini amongst others, and conceded FIFA’s power to disgraced president Sepp Blatter.

Blatter won the first vote, 133-73, but did not earn the two-thirds majority to avoid a second vote, which would go to the simple majority.

But Al-Hussein spared the second vote, as it was hard to imagine winning over 31 new voters without sacrificing another.

And then the five-term president stepped to the microphone.

“Thank you, but first of all I would like to give compliments and express my gratitude to His Royal Highness Prince Ali. Because Prince Ali was a competitor, a challenger, and he has obtained a very good result and he, in a certain situation, easy he could have said ‘No, let’s go further. Perhaps I could receive more votes’. On the other I thank you. For the next few years I will be in command of this boat called FIFA and we will bring it back offshore, back to the beach, and it can be played beach soccer everywhere. But we have to work on that. Four years ago we had a lot of problems to solve and I challenged you at that time. I am not going to challenge you this time… but we must have a better representation of the different confederations.” 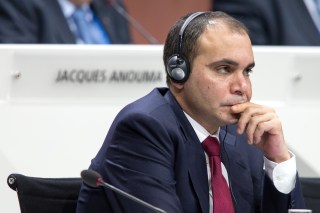 He went on to say they need to better women’s soccer, to help Oceania and “not touch the World Cup.” He said he takes the responsibility to bring back FIFA.

And, of course, even those comments rang of a man who brokered deals, a master politician who couldn’t be beaten even in one of, if not the, darkest times in FIFA’s history.

“I’m not perfect. Nobody’s perfect, but together we go.”

Inspiring. Regards to Prince Ali (right) for giving it a proper try.