First things first, let’s all take a deep breath and try to compose ourselves after what we witnessed this afternoon.

Yes, the U.S. national team just came from behind — 3-1 down with 20 minutes to play — to beat the Netherlands, third-place finishers at last summer’s World Cup, 4-3, on Dutch soil.

Yes, it was “just a friendly,” but it was the kind of friendly victory that couldn’t have come at a better time — and broken a worse trend — for Jurgen Klinsmann’s side just 32 days before the start of the 2015 CONCACAF Gold Cup.

Without any further ado, player ratings for the 4-3 victory over the Dutch…

GK — Brad Guzan: 6/10 — Other than having to pick the ball out of his own net three times, Guzan was just fine in goal. The saves he did make were pretty routine, with the exception of Robin van Persie’s close-range header in the 47th minute. The USMNT is in good hands with Tim Howard still out of the picture through this summer.

LB — Brek Shea: 5/10 — Memphis Depay and Quincy Promes found lots and lots of joy — too much, to be honest — down the wings in the first hour, which led to the first two Dutch goals. 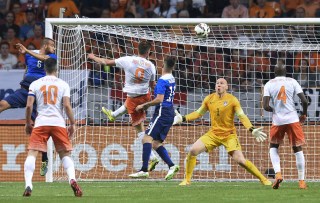 CB — John Brooks: 6/10 — It was the best of times, it was the worst of times. That pretty much sums up Brooks’ outing, which will be remembered as much for the lesson that Klaas-Jan Huntelaar taught to him in the first half, as his surging run through midfield for his 70th-minute goal.

CB — Ventura Alvarado: 5/10 — A first half to forget, and a second half on the bench. Alvarado, 22, was subbed off at halftime after repeatedly losing track of Huntelaar — more frequently than so did Brooks, even — and spending more time chasing back toward his own goal than anything else.

RB — Timothy Chandler: 5.5/10 — As was the case with Shea, too much space and time for the talented Dutch wingers led to two easy goals in the first 60 minutes. Has Chandler developed at all since debuting for the U.S. in 2009, or has he actually regressed?

[ MORE: Three things we learned from the USA’s wild win in Amsterdam ]

CM — Kyle Beckerman: 7/10 — Protecting Michael Bradley (more on him in a second) with a true defensive midfielder is the first thing necessary to get the most out of the USMNT’s best player (Bradley), and Beckerman did just that.

CM — Michael Bradley: 8.5/10 — On Friday, Bradley reminded us all what many have known all along — he’s the most important USMNT player by a country mile, and every lineup should be built to maximize what he does best: tireless work from end to end, driving runs through the heart of midfield and providing the second-to-final through ball from deeper midfield positions (all three on display HERE). Bradley did all of those things late on against the Dutch, and the entire team — by that point, mostly youngsters — were nigh unstoppable. 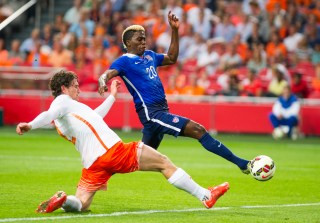 LW — Gyasi Zardes: 7/10 — 81 minutes of work, and he got a goal, but some might feel he could/should have had a second and/or third. Still, his rise from MLS benchwarmer to fighting for a Gold Cup roster spot in the span of 16 months is pretty remarkable.

CF — Aron Johannsson: 4.5/10 — To put it nicely, Johannsson had a stinker in Amsterdam. Sure, he worked hard and that’s important for a lone center forward, but the role doesn’t really suit him all that well. For all the work defensively and trying to hold the ball up against two, three and four defenders at a time, he was never really able to link up and bring anyone else into the game.

RW — Fabian Johnson: 7/10 — Johnson, naturally a left-sided player, built upon his best club season (Borussia Monchengladbach finished third in the Bundesliga and qualified for next year’s Champions League) with another strong performance. His cross for Zardes’s goal was pinpoint, while Chandler would have had an even worse game without Johnson’s defensive assistance.

[ MORE: USMNT moves up one spot in latest FIFA rankings ]

CB — Michael Orozco: 5/10 — Completely lost Huntelaar four minutes after entering the game, setting the tone for the onslaught that was the first 20 minutes of the second half. Klinsmann’s constant changing of center back partnerships isn’t doing his players any favors, either.

CM — Mix Diskerud: 5/10 — One of the earlier subs to come on, but had very little impact on the game. Hit a couple of dangerous cross-field balls, but mostly served as a defensive presser.

RW — DeAndre Yedlin: 7/10 — In his 33 minutes on the field, Yedlin completely changed the game for the USMNT, just as he did at the World Cup, constantly providing width and a running in behind the Dutch defense time and again. He remains the U.S.’s ultimate late-game weapon.

CM — Danny Williams: 6.5/10 — No noticeable drop-off when he replaced Beckerman, and he took his goal — wicked deflection and all — well in the 89th minute.

CF — Bobby Wood: 7/10 — Forget the goal — OK, just kidding — but Wood was a huge improvement over Johannsson in the 65th minute. The game was more open by that point, but Wood took what was in front of him and made the most out of his latest opportunity.

LW — Jordan Morris: 7/10 — This kid continues to have an impact, no matter the level of competition — Ireland, Mexico or the Netherlands. Such a smart player, sees and uses space so well, and provided the perfect cutting cross to Wood for the winner. We’re going to find out how he fares in a competitive game sooner than later.