D.C. United and the District of Columbia together have moved one step closer to the 1996-original Major League Soccer club building its own soccer-specific stadium at Buzzard Point and putting to bed years of unwanted relocation rumors.

District Mayor Muriel E. Bowser and United announced on Monday a new stadium development agreement between the District and club “that clears the way for D.C. United to build a new soccer stadium in the District of Columbia.”

According to United’s press release, the new agreement, which is a restructured version of an original deal negotiated by former Mayor Vincent Gray, includes “improved deal terms which will result in better financial protections for District of Columbia residents, clarify the size and timeline of the stadium, and strengthen community engagement.”

The new agreement hinges upon the local government securing the proposed land site before Sept. 30, 2015, according to a report by the Washington Post. According to that same Post report, United have also agreed to sign a non-relocation agreement valid until Sept. 30, which prevents the ownership group from moving the team to Virginia, as had been reported over the weekend to have been threatened, or elsewhere.

A number of hurdles must still be cleared before shovels go into the ground at Buzzard Point, the peninsula very near the intersection of the Potomac and Antacostia Rivers in which the stadium is proposed, but this time it certainly feels as though United and the District are closer to building that long-desired stadium than they’ve ever been before.

Thanks to the hard work of the District government and D.C. United staff, a world-class soccer stadium will call Buzzard Point home – for good. This agreement will add vibrancy to a neighborhood on the banks of the Anacostia River and generate jobs for District residents as my administration creates pathways to the middle class. With this agreement, Washington, DC, remains the sports capital, and Washingtonians stand together to declare: Vamos United!” 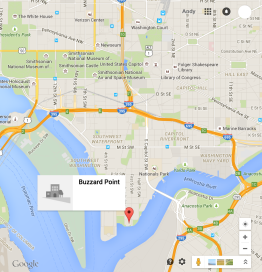