Judging by Monday’s match write-up on the Australian team’s web site, “Staff writer” is not feeling the USWNT’s chances at the 2015 World Cup.

In a piece entitled “Australia v USA: 4 things we learnt“, the site criticizes the attacking mindset of head coach Jill Ellis, claiming that Hope Solo was the only thing that kept the States around long enough to win 3-1.

Whether you think it’s correct, it is audacious stuff for a team web site. Take it from our friends at Equalizer Soccer, who posted the “hot takes” of the Aussies: 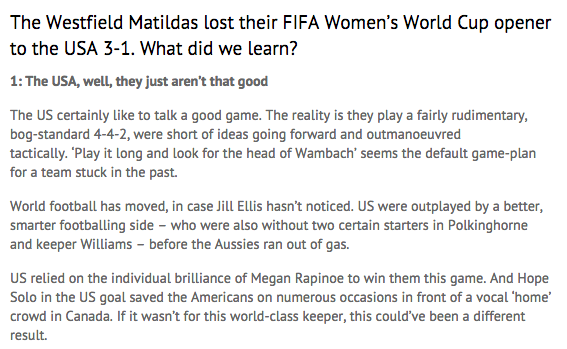 It’s just one game, though much of it carries interesting if not indebatable criticism (Wambach shouldn’t have been as much of a focal point, if even a surefire starter, and the Matildas carried the first 25-30 minutes).

The critique is missing this point, though: if the States had brilliance from Rapinoe and Solo, 2/11 of its Starting XI, it’s hard to claim Australia was vastly superior.

And it could’ve been a different result. Solo was fantastic in a high-pressure situation, but there’s a big difference between, “Wow, that could’ve been a 3-2 win on a better day” and the Aussies being a “better, smarter footballing side.”

So how ’bout we relax, “staff writer”?