Tuesday’s Group C finales in the Women’s World Cup provided both a true upset and a good show of heart from a team that had been dominated through the first 180 minutes of group play.

Japan fought through a valiant effort from an Ecuador side that had been battered to the tune of 16-1 through two matches, while Cameroon overcame an early deficit to advance to the knockout rounds.

[ RELATED: All the latest WWC news ]

Japan will face the third place team from Group A, B or F, while Cameroon knows it’ll face China on June 20 in Edmonton. Switzerland… waits.

A goal in the 24th minute from Ana-Maria Crnogorčević put the Swiss on top and in charge of their World Cup fates, but Gabrielle Onguéné and substitute Madeleine Ngono Mani ensured that Africa would have a World Cup knockout round entry with early second-half goals.

It’s safe to say few saw this coming. The Swiss are ranked No. 19 in the world compared with Cameroon’s 53rd. This is the CAF nation’s first World Cup, and their lone Olympic appearance was a quick 0-3 record with a minus-10 differential.

The Swiss will hope its three points and plus-7 goal differential are enough for a berth in the next round. For that to happen, they’ll need either Sweden, Spain or France to avoid full points in their respective finales.

Cameroon with another incredible story from this Women’s World Cup. Marvelous moment for that team and country. 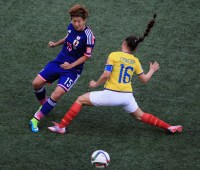 Yūki Ōgimi’s 5th minute goal was enough, as Japan surprisingly found just a single goal against an Ecuador side that allowed 10 to Switzerland and six to Ecuador.

Ogimi’s goal was almost casual, as she flew at a cross and got just enough to knock it into the Ecuador net. While the score line didn’t indicate dominance, the rest of the statistics did. Japan had 66 percent possession, out attempted Ecuador 20-3, won the corner battle 9-0 and even committed 22 fouls to their opponents’ 10.