Brazil gave Sweden the help it needed to claim the final knockout round place, and Pia Sundhage’s dreams of a World Cup for her home nation remain alive.

The Brazilians were assured Group E supremacy heading into the evening, and made it a perfect 3-0 with a 1-0 win over Costa Rica. With the win, Brazil remains the only team in the group stage to not allow ago.

Elsewhere, Korea Republic booked a date in the knockout round with a comeback win over Spain.

Former WPS player of the year Vero Boquete’s early goal temporarily lifted Spain into the knockout rounds before a pair of second-half goals dropped the Spanish side into the bottom of Group E.

Captain Cho So-hyun and defender Kim Soo-yun netted for South Korea, which moves on to face France on June 21 in Montreal. 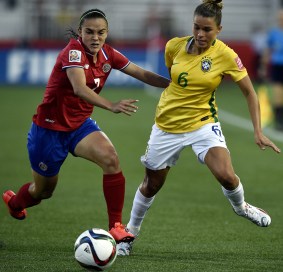 Costa Rica held the line for 90 percent of its match with Brazil. Despite being out shot dramatically, the CONCACAF side looked capable of getting a point.

That would’ve been enough to get into the knockout rounds if South Korea and Spain drew, but Raquel Fernandes’ 83rd minute goal made that a moot point, breaking Costa Rican resolve and hearts.

Costa Rica falls to third in the group, and its two points sink it beneath Sweden for the final knockout slot.

Sweden will now face off with Germany on June 20 for the right to play the winner of France vs. South Korea.