After leading Juventus to a Serie A title and the Champions League final this season, it looks like Carlos Tevez is headed home to Argentina.

The striker is under contract with the Italian champions through next season, but has been linked with a move to some of Europe’s top clubs, including Liverpool, Atletico Madrid and Paris Saint-Germain.

However, reports out of Italy are now stating that Tevez will be returning to his boyhood club Boca Juniors, whom he played for with the youth system as a teenager before breaking into the first team from 2001-2004.

Argentinian legend Diego Maradona posted a photo to his Facebook page that shows Tevez in a Boca jersey, with the words “Welcome back!,” all but confirming the move. 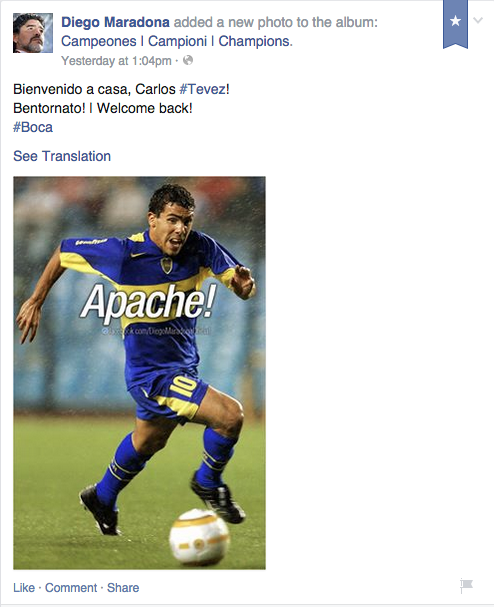 With a Tevez move away from Juventus Stadium likely, the club signed another Argentinian goalscorer Paulo Dybala from Palermo as a possible replacement.

[ RELATED: Messi says he would “give it all up” to win Copa America with Argentina ]

Tevez is coming off arguably his best season as a professional, scoring 29 times in 47 matches, the highest tally of his career since netting 31 goals for Corinthians ten years ago.

At 31 years of age, Tevez has shown that he can still be one of the most dangerous strikers in the world, and despite interest from some of Europe’s premier clubs, you can never fault a player for wanting to go home.