Brazil had the better chances throughout the match, but Australia was able to capitalize late to clinch a berth in the quarterfinals. Kyah Simon scored in the 80th minute to lift the Matildas to victory and send Brazil and five-time FIFA World Player of the Year Marta packing.

The win was the first victory for Australia in the knockout rounds of a World Cup, men’s or women’s.

Formiga had the best chance of the first half for Brazil in the 28th minute, curling one towards the top corner, but Lydia Williams just got her fingertips to deflect the shot over the bar.

As the rain came down in Moncton, it was Formiga again who nearly gave Brazil the lead after the break. The midfielder was open at the back post off a corner kick, but her header hit the post and Australia was able to clear the ensuing scramble in the box. 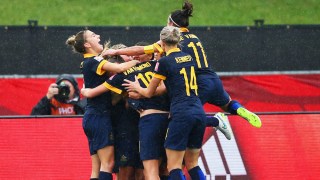 Despite not creating many chances to challenge Luciana in net, Australia finally opened the scoring in the 80th minute. Lisa De Vanna snuck behind the Brazilian defense and moved in, bending a shot on goal. It looked like an easy save for Luciana, but the keeper bobbled the shot and Simon buried the rebound.

“I think we’ve still got to keep going before it’s the biggest moment ever,” Australia coach Alen Stajcic said. “We’re all super proud, so excited. I think exhilarating is the word for such a victory against a big, powerful football nation, but there is still more to come.”

Australia will face the winner of Japan vs. Netherlands in the quarters, who play on Tuesday in Vancouver.

The loss marks Brazil’s earliest ever exit from the Women’s World Cup, which held a Round of 16 for the first time due to the expansion of the tournament to 24 teams. Brazil will now have to focus on the 2016 Rio Olympics on home soil next year.