Home teams went five for six as a busy MLS Wednesday wrapped up most of its action by 10 p.m. ET, leaving just Portland and L.A. to duel in California.

Only DC United found points on the road, all three in fact, as the East’s top squad picked up a win in Chicago.

How’d the rest of the matches shake out? Glad you asked…

Ambroise Oyongo’s goal looked to give the Quebecois side an advantage in its attempt to pick up a first MLS win at BMO Field, but TFC’s trio of Designated Players soon took over. First it was Sebastian Giovinco to Michael Bradley. Then, Bradley to Jozy Altidore. Finally, “Seba” converted a PK he won to make it 3-1. TFC now has the second-best points-per-match in the East.

[ WATCH: Bradley to Altidore for a match-winning goal ]

A wild 200 seconds or so to start the match had us set for a thriller between the 2014 MLS playoff foes, as Lee Nguyen and Kei Kamara traded goals. The red-hot Kamara netted his 12th of the season, off an Ethan Finlay feed, to account for the match’s only other goal, though, and we’ll leave it to MLSSoccer.com to adequately describe a bit of included controversy:

But the goal didn’t come without controversy. What looked like a handball on Jeremy Hall wasn’t called in the New England box just seconds before the goal, and when Finlay received a cross from Waylon Francis the ball seemed to hit his arm as well. But referee Fotis Bazakos again stayed silent.

Hey guys, Conor Doyle scored a really nice goal, and DC proved that good teams often win games they might not deserve to see wind up in the win column.

Mike Grella scored in the fourth minutes, and RSL saw red twice in a loss at Red Bull Arena. Demar Phillips and Javier Morales were ejected. 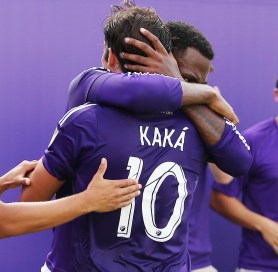 Cyle Larin and Kaka both scored nice goals to set the expansion side in the win column once again. Kaka’s eight goals are great but expected; What Larin has done as a rookie is incredibly promising not only for Orlando City and MLS, but for Canada. He has six goals in his first 847 minutes for Orlando, adding three goals in four matches for Canada this year. Wow, this kid can play… and he’s 20.

This one wasn’t a beaut by any stretch of the imagination, as Maurice Edu missed a PK and CJ Sapong was denied a goal for a questionable foul on Andrew Wenger. Fortunately for Philly, Seattle was all out of sorts without Clint Dempsey and Obafemi Martins, and Sapong’s sixth of the season was enough for a ‘W’.